The Coral – Nightfreak And The Sons Of Becker 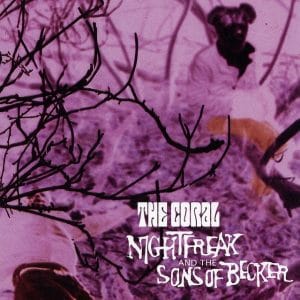 They’re a busy lot, these lads from Hoylake. Only six months after the release of the marvellous Magic And Medicine, along comes The Coral‘s latest strangely titled oddity. It’s a lo-fi offering that was apparently recorded “as a laugh” in only seven days with Ian Broudie at the production desk.

Nightfreak And The Sons Of Becker isn’t intended as an official Coral album – instead, this clocks in at just under half an hour, is being sold at mid-price and is a limited edition. Releases such as these are often dismissed as self-indulgence designed to squeeze as much cash as possible from die-hard fans, and indeed Nightfreaks does sail close to this accusation at times.

However, a band of The Coral’s quality aren’t going to record an album full of dud tracks, and while there isn’t anything here to stand alongside Dreaming Of You or Pass It On, there are more than enough psychedelic-tinged jams to keep Coral fans happy. Venom Cable, in particular, is a headspin of a funk/reggae workout, while Sorrow And The Song is a tender ballad with James Skelly in particularly good voice.

The Coral are at the best though when they really wig out – Migraine and I Forgot My Name are adrenaline fuelled rushes of songs, the chaos of the former bringing to mind some old punk classics. Best of all is the frankly barmy Auntie’s Operation. This showcases some superb slide guitar and some unpredictable tempo switches, while Skelly hollers, “Auntie’s operation and she’s coming around.” It makes no sense at all but is hugely exciting.

Sadly though, this excellence can’t be kept up at all times. Keep Me Company is just dirge-like and Lover’s Paradise is music hall pastiche of the type that The Beatles used to knock out when they were bored. Moreover, the brief filler of Why Does The Sun Come Up really should be bought by the Government to warn youngsters of the dangers of too much cannabis.

However, as a stop-gap album, perhaps we shouldn’t expect too much of Nightfreaks. This would have made a cracking EP, but as it is this is strictly for fans who can’t wait for that third album.