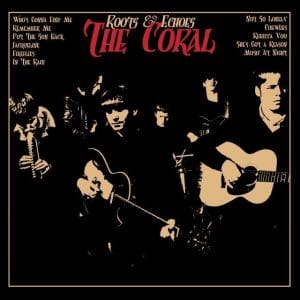 Or the album where The Coral grow up.

As we all know, when we grow up we put away the childish things – dancing bears, drunken sea shanties, people who’ve swapped their arms for roots – and we become men. Except, aren’t those the exact things which make The Coral unique? Without them are they not just a bunch of semi-stoned psychedelic revivalists?

Yes and no. Without the wild inventiveness Roots & Echoes does occasionally sag in a way that no previous album did. But while the runaway train of ideas which cascaded through the last three records ensured that boredom was never a factor listening to The Coral, it had the additional effect of glossing over some of the experiments which should have been left on the recording room floor.

Also, you could easily make the case that all the best Coral songs are the ones played a bit straighter – Dreaming Of You; Pass It On – so an entire album of that, where they shelve those which sound like Russian cossack dancers taking Captain Jack Sparrow to the funfair in Minsk and just concentrate on crafting slices of melody so timeless they could force Brian Wilson back into his sandbox could be a really good idea.

Although it doesn’t start brilliantly. Who’s Gonna Find Me is remarkably unremarkable, only saved from total anonymity by some tied-dyed riffing which sound like Santana after some bad seafood, while Put The Sun Back just kind of whispers past, like someone let all the air out of In The Morning.

Just then, when you think they’ve really blown it, the sunshine finally cracks through. Jacqueline is exactly what we’d been looking for. A glorious, simple piece of melodic brilliance to just lay back too, while rays of blissful harmony radiate you. Fireflies is good too: a big, boss, bass drum with guitars flittering around it like nymphs and James Skelly’s baritone hooking the whole thing together.

But while Roots & Echoes has some ace moments, it steps back from the brink of insanity in a way they’ve never done before. In The Rain, for example, seems destined to break into a punk rock ho-down in 5/4 time, but it never does. And it’s such a shame.

What The Coral need is the blend. The third way. And it’s ultimately what really hangs Roots & Echoes out to dry – because they’ve nailed it before, on the last record. That proved that they could have their melody and eat it.

The rumours have pointed to a band inches away from falling into the abyss and Roots & Echoes resonates to the unnerving sound of a band wishing to play it safe. Whatever doesn’t kill you may make you stronger, but does it have to make you less brave? Sadly for The Coral, it seems so.