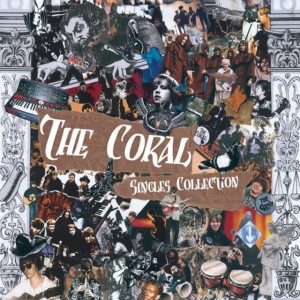 It’s a bit of a shock to see a ‘greatest hits’ collection from The Coral – after all, it only seems like five minutes ago that they burst onto the scene with their self-titled debut album. Even with five studio albums under their belt, it all seems a bit soon to be assessing the band’s career – maybe it’s that air of eternal youthfulness they still exude.

Yet this is as good a time as any for a ‘story so far’ round-up for the lads from Hoylake, Merseyside. At the start of the year, it was announced that guitarist Bill Ryder-Jones had left the band, making this a handy breathing point while the band regroup. It’s also worth remembering that The Coral were the first act on Deltasonic to break big, paving the way for names such as The Rascals, Candie Payne and The Zutons – a much more influential act than you may presume, in other words.

Singles Collection is, as the name may suggest, a collection of The Coral’s singles so far, from the debut Shadows Fall in 2001 right through to Being Somebody Else, specially recorded for this collection. It’s not in any type of chronological order, which is a shame as it would be interesting to see how the band’s sound matured. For, if there’s anything to be learned from listening to the Singles Collection, it’s that the Coral grew up (not old) pretty gracefully.

Cast your mind back to that debut album. Full of what sounded like Russian drinking songs and sea shanties, an undeniable sense of melody mixed with the invention. Dreaming Of You, Goodbye and Shadows Fall all feature here, and all sounds as fresh as they did back in 2002. Dreaming Of You in particular is still insanely catchy, but it’s kind of strange that the band’s third single, the brilliantly barmy Skeleton Key, is nowhere to be found on this ‘singles collection’.

Maybe it’s because the stuff that’s a bit too wacky wouldn’t sit well amongst the general pastoral feel. The weirdest the album comes is in Magic & Medicine’s Bill McCai, the completely bonkers, yet undeniably touching tale of a commuter driven to suicide by the sheer monotony of day to day life. The fact that it belts along at a 100mph and ends with the band hollering “bye bye Bill McCai” makes it all the more enjoyable.

However, the general feel is of relaxed, summery ballads – which The Coral do very well. There’s a yearning in Who’s Gonna Find Me which lead singer James Skelly brings out beautifully, while In The Morning, from the under-rated The Invisible Invasion album, should be a compulsory place on every radio playlist in the country, just listening to it fills you with a sense of peace and well-being, even in these recession-looming, credit crunching times.

The long-term Coral fan will note some oddities with the album, such as the aforementioned disappearance of Skeleton Key as well as the selection of Leiza which, while being unutterably lovely, certainly wasn’t ever released as a single. Yet the twangy menace of Don’t Think You’re The First or the pure pop perfection of Pass It On makes any quibble rather a minor one.

And besides, hardcore completists are likely to be sated with the addition of a bonus disc entitled Mysteries & Rarities – a collection of out-takes, live tracks and previously unreleased recordings. The quality is, as ever with these sort of discs, is variable, but it does include the original demo version of Dreaming Of You and a live cover version of the old Teardrop Explodes classic Reward.

So, while it would have been nice to have heard some of the band’s more experimental side, maybe a ‘best of’ isn’t the right place for that. ‘Best of’ collections are intended to introduce the band to an audience who may not have heard them before, and to sum up a band’s career to date. And in that respect, Singles Collection does its job just beautifully.