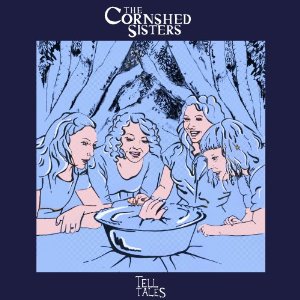 Marie Du Santiago was in a short-lived post-Kenickie band called Rosita. This project ended some 11 years ago. Whatever happened in the intervening years, her return with The Cornshed Sisters’ debut album is as far away from her punk-pop roots as is conceivably possible.

This quartet of sisters, comprising of Jenny, Cath, Liz and the aforementioned Marie, all hail from the north-east of England. A week after fellow Mackems The Futureheads released their a cappella album, we have another LP in a similar, withdrawn vein.

The Cornshed Sisters aren’t actually siblings by blood, unlike fellow northerners The Unthanks, but sisters by vocal tone and musical taste, boasting of a shared passion for piano ballads, gospel, guitar pop, folk songs and country music. Tell Tales is a humorous synthesis of topical if improbable subject matter, ranging from a beekeeping folk song to a number about making pies out of people. To say The Cornshed Sisters’ music is slightly peculiar would be something of an understatement.

Tell Tales’ sparse minimalism compares less with The Unthanks than with The Staves. Tommy is the only track that is completely a cappella – it’s a beautiful spiritual track about death with the immortal line “Tommy was a bright lad as shiny as jewels, he took his precious heart down to the dead man’s poo”. They convey this whilst radiating like guardian angels performing a last-rites pagan ritual to celebrate Tommy’s life. All the while you’re susceptible to fall into the sisters’ emotive world.

An underlining quality of The Cornshed Sisters is their humour, which is especially effective given their sincere delivery style and tone. Debut single Dance At My Wedding is a song about re-befriending a man in a sequinned suit who “makes a good gravy”, but is sung in a crestfallen, honest manner that makes you sympathise with these poor ladies despite its hilarious angle. Yet this is by no means a comedy record; rather it’s a light-hearted storybook with a penchant for covering insecurities amidst clever lyrics and beautiful harmonies.

If You Were Mine darts around like a refined polyrhythmic influenced cousin of Joanna Newsom‘s Have One On Me, thanks to interlocking fluctuating rhythms, and is the most developed song here, with both piano and the brushed march of drums intermittingly cascading in harmony. Soft White flourishes under barbershop quartet homophonic textures. The final track Sail To Me is a bubbling nautical piano-led ballad with reassuring yet eccentrically described pun-tastic lyrics: “I want you to anchor to my arm” and “dam the tide, sail to me”.

The Cornshed Sisters display moments of Joni Mitchell‘s exquisite songcraft, the choral elegance of The Roches and witty buffoonery of John Grant amalgamating Tell Tales into its own refreshing niche in the ever-expanding folk cartel.

The Cornshed Sisters MP3s or CDs

The Cornshed Sisters on Spotify