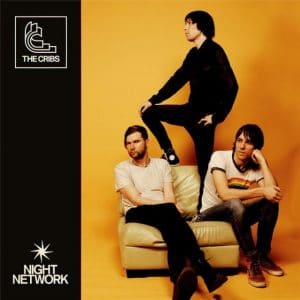 It’s hard to understand people who don’t like The Cribs. They’re out there, they exist. But why wouldn’t they like them? How couldn’t they? How could listening to any Cribs output, from Another Number to Be Safe to In Your Palace, bring forth the conclusion: “Nah. Not for me.”?

Yes, music is subjective and yes, different strokes for different folks, and yes, blah, blah, blah. But really, if you are someone whose response to The Cribs is to express a feeling of dislike, or to either metaphorically or literally shrug, then well, you have this writer’s bafflement. You’ve earned it.

The point to be made is, there’s a certain degree of bias here. Bias towards truth, of course, but bias nonetheless. It’s hard to move past the fact that Night Network is, very much, a Cribs album. Which is a good thing. Because, as we’ve discussed, The Cribs are good. They make good albums. There are a whole of curveballs thrown, but then again Cribs albums always tend to hurl those. Expect the unexpected. This is good.

You get a bit of swooning Yorkshire new Romanticism (Under The Bus Station Clock). And you get a bit of low-key, reverby pensiveness (Earl & Duke); imagine if Bruce Springsteen’s Nebraska had instead been titled Normanton. There’s also a series of barnstorming anthems, the us-against-the-world Screaming In Suburbia, the jaunty jangle of Running Into You and the magnificently cryptic and caustic I Don’t Know Who I Am, a chance for the brothers Jarman to reunite with Lee Ranaldo and create something to function as a magnificent centrepiece for the whole thing.

And that whole thing is as belligerently brilliant as could be hoped for after two decades, seven studio albums (and one best of), countless shows and almost two years of a legal quagmire over who owned the rights to their back catalogue that left this most uncompromising of acts questioning whether it was even worth carrying on. Night Network may not be the 12 tracks which would shake the person who doesn’t like The Cribs out of their most curious position. But it is 12 more assertions of greatness from a band who you really should like.