The Cribs – The New Fellas 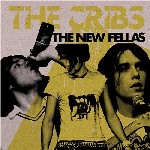 The Cribs’ self-titled debut album came out last summer, as was a largely overlooked affair. It arrived at a time when we were being swamped by the omnipresent melodies of Snow Patrol, The Killers and Razorlight amongst others. There was simply no place for these three brothers from Wakefield in last year’s overcrowded market. It’s not that they were inferior in any way – they just didn’t have one of those sing-along anthems to secure any reasonable sales.

Which is a shame, as this was an album filled with some true gems. Lo fi rock ‘n’ roll with big hooks was what they specialised in, (Think The Strokes and The Libertines for starters) a formula that spawned great singles such as You Were Always The One. But if you think all this sounds like a devoted fan’s epitaph to one of those eternally underrated bands, you’d be wrong.

Things have changed in 2005 – The Cribs are now a real force to be reckoned with. They’ve benefited from being attached to the thriving Leeds music scene, particularly their association with chart eating monsters Kaiser Chiefs. A support slot on the their mammoth tour earlier this year and some golden words of endorsement have opened up a previously dormant market.

And if this wasn’t enough, the lead single from this album, Hey Scenesters, has even appeared on an episode of the smash teen drama The OC. From Wakefield to Newport Beach, The Cribs have come a long way. And with an album of the quality of The New Fellas, they certainly deserve to keep this seat at the top table.

One thing that’s clear is that their sound, in sonic terms, hasn’t changed in the slightest. All the songs still feel like they were recorded in a toilet in a single take, but are no less likeable as a result. Indeed, it is the carefree nature of their material that endears them to the listener, not to mention their disdain for ‘scenesters’ and industry fat cats, which is recurring theme throughout the record – they’re certainly staking their claim as a true band of the people.

The euphoric hooks are also still there in abundance, they clearly haven’t lost their ability to write a classy pop tune. Take for example Hey Scenesters – a trademark Cribs track, it’s built around a series of guitar riffs that somehow miraculously stick together and a large, rowdy chorus (This could be said for the majority of tracks on here).

Other high points include recent sing-along friendly single Mirror Kissers, arguably their finest moment to date, and the fantastic I’m Alright Me, which epitomises their laid back, nonchalant and often hazy outlook on life with the glorious refrain of “Take drugs! Don’t eat! Have contempt for those you meet!” – you can imagine this being written into indie folklore. Then there’s the more downbeat and possible future single We Can No Longer Cheat You, which you can picture being sung around campfires at festivals this summer so memorable the chorus.

This is hardly a progression from their debut, but we’ll forgive them considering no one heard them the first time. And The Cribs aren’t a band to take too seriously, either – they’re not interested in challenging people, they’re simply a band to put a smile on your face, to get drunk to, and ultimately to soundtrack a hassle free and blissful summer.