The Cult – Choice Of Weapon

by Sam Shepherd
published: 21 May 2012 in Album Reviews
Tweet 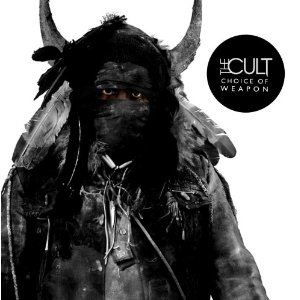 The Cult have been around for what seems like an eternity now. They’ve managed to survive various musical trends and, so far, life itself. Since their heyday, they’ve done this by adopting aspects of grunge in the ’90s and Nu-metal in the early 2000s to varying degrees of success. All the while they’ve drifted away from the essence of what made The Cult such an exciting band in the ’80s when they were knocking out the likes of Sonic Temple and Electric.

Choice Of Weapon finds The Cult reunited with producer Bob Rock, the man who supplied the band with its more bombastic sound. Alongside him is Chris Goss (Kyuss, Masters Of Reality) whose desert-fried sensibilities are in evidence, albeit to a lesser degree. Irrespective of production polish (and in Goss’s case, rumble), it’s ultimately down to the band to point the way forward or in this case, backwards. Choice Of Weapon is the closest The Cult has sounded to its ’80s pomp in some time, yet despite the danger of sounding horribly dated, it works perfectly for them.

Honey From A Knife appears to be partially indebted to Goss’s influence. With its refrain of “We got the drugs – drugs can heal” and relentless riffing, there’s an undeniable hint of Queens Of The Stone Age. It could almost be a sister song to Feel Good Hit Of The Summer. Ian Astbury is in fine fettle throughout; he seems to be channelling some of the finest Rock vocalists on these songs whilst retaining his own identity. Unsurprisingly there’s more than a considerable shade of Jim Morrison to his performances (Astbury fronted an incarnation of The Doors during the early 2000s), but there are elements of Mark Lanegan’s low growl, Glenn Danzig and – somewhat surprisingly – David Bowie, too.

It’s this Bowie influence that produces arguably the high point of the album on Love > Death. Duffy’s guitars are perfectly judged, finding the biting point between vulnerable and forceful, whilst Astbury borrows from Wild Is The Wind before turning in a quite breathtaking performance as a fire and brimstone style preacher. Elemental Light finds the pair reaching for the stars thanks to some inspired guitar work. It’s here that Lanegan’s drawl is evoked as the band conjures up a stadium sized rock anthem that drifts between slow burning verses and explosive choruses.

Recent single For The Animals is a more stripped back affair, heading directly for all out rock ‘n’ roll bluster as Astbury directs his empathy towards the downtrodden and ignored. Amnesia follows in a similar vein as a straight up rocker; it’s a direct and no frills fistbanger complete with a chorus that sounds not unlike Iron Maiden at their most melodic. The title of Lucifer might hark back to the days when Rock worshipped at the altar of the cloven hooved one, but this hoary old rocker examines the destructive power of crack cocaine over a soundtrack of a gloriously raucous wah-wah infused riff.

Similarly, A Pale Horse could have nestled quite happily on Sonic Temple or Electric with its catchy chorus and thunderous rock attack. Admittedly it’s not exactly on a par with Wildflower, but Duffy’s solid guitars and Astbury’s way with a tune on the chorus just about make up the difference. They wrap things up with the moody slow burn of This Night In The City Forever, which finds Astbury in full Morrison mode; it’s such an impassioned performance that it just about works.

Choice Of Weapon sees The Cult back to doing what they do best, which is producing slightly dark and remarkably catchy rock ‘n’ roll. There’s nothing new here whatsoever, but sometimes big chords and roaring vocals are all that’s needed.

The Cult MP3s or CDs

The Cult on Spotify

More on The Cult
The Cult @ O2 Academy, Birmingham
The Cult – Choice Of Weapon
The Cult – Best Of Rare Cult