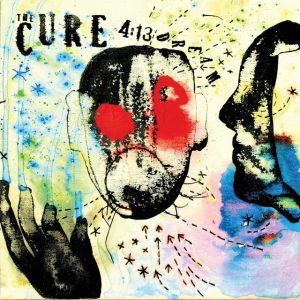 Icons of the ’80s. Thatcher. Reagan. Bob Geldolf bashing his fist on the table and yelling “give us the fockin’ money”. Deedly boppers. Snoods. Frankie Says t-shirts.

For people of a certain age and a certain musical persuasion, you can add a man with a heroically messy hair-don’t, smudged lipstick and clad all in black. Robert Smith and The Cure were, for many people, their band through their difficult adolescence.

And unlike most of his contemporaries in the ’80s, Smith and his band have now been going for nearly 30 years. They may only release an album every four years (all weirdly in the same year as the US Presidential Election), but that won’t stop The Cure’s loyal army of fans awaiting that release with eager anticipation.

Originally intended as a double album, 4:13 Dream now has just 12 tracks and was promoted by an ingenious marketing campaign which saw singles only being released on the 13th of each month. What’s more, there’s plans to release the remainder of the sessions as a companion piece sometime next year.

Smith may look exactly the same, and his band sound the same as well. Indeed, there’s something vaguely comforting about hearing the opening bars of Underneath The Stars and just basking in the swirling guitars, air of wistful but doomed romance and Smith’s famous yelp.

Although Underneath The Stars may indicate that 4:13 Dream is in the Disintegration/Pornography mould of Cure albums, the reality is far more upbeat. This is the perky, quirky Cure of Friday I’m In Love, Love Cats and Inbetween Days – indeed, The Only One is the catchiest thing they’ve done in years, with Smith taking great delight in lines like “I love what you do to my head…it’s a mess up there”.

There’s even a hint of funk on Freakshow, which displays the influence that The Cure hold over bands such as The Rapture and Hot Hot Heat while Sleep When I’m Dead is most reminiscent of vintage Cure – unsurprisingly so, given that it was originally written for the 1985 album The Head On The Door.

Lyrically, Smith is still the angst-filled teenager in a middle-aged man’s body. “I won’t try to bring you down about my suicide” he promises in the excellent The Reasons Why, while the paranoid, doomy Switch sees him cry “I’m tired of being alone with myself”. For a man about to turn 50, he manages to pull it off rather brilliantly.

The other star on the album is guitarist Porl Thompson, whose work throughout is excellent. Whether it be hitting the wah-wah pedal on Sleep When I’m Dead, spreading squealing, vicious riffs all over Switch or performing some lovely slide guitar on the tender Sirensong, he confirms his reputation of one of the country’s most under-rated guitarists.

As good as 4:13 Dream can be, it never hits the heights of prime Cure, the band of Kiss Me Kiss Me Kiss Me or Disintegration. Obviously nobody’s expecting them to record anything revolutionary at this stage of their career, but it’s fair to say that this album will probably only get Cure enthusiasts excited.

Besides, there’s enough special moments here, especially the frantically paced closer of It’s Over to remind one of how special The Cure can be. It may do exactly what it says on the tin, but sometimes that’s more than enough to be getting along with.