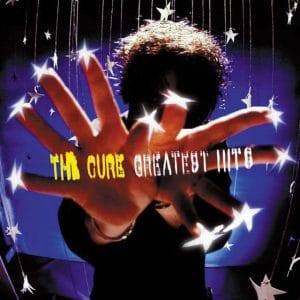 Twenty-two years ago a quasi-punk band called The Cure, fronted by one Robert Smith, had a huge hit with a song called Boys Don’t Cry. it launched them slowly yet surely into a nation’s consciousness. They’d release umpteen albums and singles, play Wembley and all the other big barns, influence a generation and define the goth-pop genre.

This week, their latest single Cut Here wheezed into the UK singles chart at Number 54. As Greatest Hits shows, it has been a long and winding road for The Cure, but it’s been a downhill road for some time.

Since around 1990 this band have been releasing music by numbers, on autopilot and seemingly without much passion for what they do. Nor do they show any signs of disappearing gracefully, for Robert Smith (still sporting a bird’s nest where a hairstyle might be) is threatening a solo career now that the band’s relationship with Polydor/Universal has ended.

Some solace can be sought from the acoustic translations of the songs, to be found on the album’s second CD. Friday I’m In Love works especially well and there is a jolly feel to several of the songs which, in studio production, might have been more atmospheric but, ultimately, were less fun.

The Lovecats is always a hoot however it is played and Inbetween Days is special here. Yet the acoustic tracks overall don’t actually sound that much different to the originals. Percussion, piano, drums and guitar are all included.

What we’re left with here is a testimony to the fact that, for a few years, The Cure were a great band who produced some great songs, but this album also charts their decline, which makes it a bittersweet pill for any fan or admirer of The Cure.