The Cure – The Cure 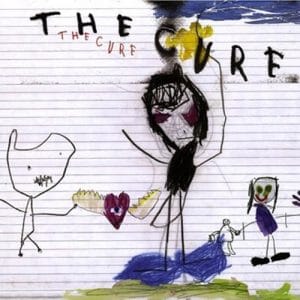 Having not been averse to wearing a spot of black (and purple) in the ’80s and early ’90s, it was not without a frisson of excitement that I turned to the latest, self-titled, offering from The Cure.

The packaging was a shock – not only the fact that it had shrunk from being a 12 inch – but also because it is glossy, bright, colourful with kiddies’ drawings, and a far cry from the grainy, sombre, monochromatic efforts of their heyday. On closer inspection, however, some of the drawings involve ghosts, blood and various evil-eyed monsters, a sign that beneath the surface all is not as cheerful as it seems.

With this album, The Cure have most definitely returned to form. Swirling, seemingly freeform (if it were not for the sheer quality of the musical execution) melodies meld into tunes and choruses with hooks to catch the most unwary of listeners, all overlaid by the distinctive, plaintive vocals of Mr Robert Smith.

In many ways this album feels like the successor and heir to Disintegration which, considering the two are separated by 15 years and Friday I’m In Love, is uncanny but very, very welcome. The style, although instantly recognisable, is not dated and would sound fresh on discerning nightclub turntables (dare we hope, radio playlists?) everywhere.

Lost, in complete contrast to its name, is an assured opener, of purposeful building beats, minor scales and a growl of feedback, overlaced by Smith’s unique vocal talents. We head next into Labyrinth, full of souk sounds reminiscent perhaps of Killing An Arab, with toms beating and mastered vocals echoing through some disturbing lyrics of boys burning in beds and blood breaking in the same heads.

This is also the first of several songs where the lyrics fall into two diametrically opposed halves – the first half emphatically declaims the sameness of everything, before switching to an equally strongly held: “It’s not the same… Everything has to have changed…”. Similarly, in Never, the beginning talks of a relationship where Smith declares that “she always does it right” but by the end realisation has dawned: “I will never be the one for her. We will never be in love.”

Of course, what makes The Cure special, and in the same league as Joy Division with the seminal Love Will Tear Us Apart, is the ability to combine love song, chirpy music and tidal waves of misery in one incredible package. Those who remember Why Can’t I Be You and Love Song will be pleased to know that they achieve this yet again in Before Three where Smith sings dolefully of: “The happiest day I ever knew… We were so in love…”

Commercial tracks feature too, with new single The End Of The World being catchy and sing-along with lyrics of Smith’s signature poetic prose, and alt.end being a guitar-led, light and airy number. Splashed occasionally amongst the songs are typical Smith demi-screams and sighs known to anyone who has danced to Love Cats, while sitting slightly strangely on a lyrical level in an album of relationship-based songs is Us Or Them, a song about religious bigotry.

Perhaps the greatest achievement on the album is The Promise, a 10 and a half minute epic of grief (“You promised me time will heal… And I waited and I waited and I’m still waiting”), which not only has moving lyrics but also some great lead guitar and drums whose pounding approaches the violence inflicted on pigskin in The Velvet Underground‘s Heroin.

Although The Cure have not been entirely absent for the last decade or so, with this new offering and with Morrissey also releasing new material, it seems that it may be time for a welcome ’80s melancholia revival.