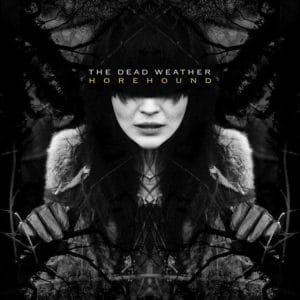 So Jack White can do no wrong, right? Well yes, so far… and those enviously waiting for him to trip up are not going to get much joy with The Dead Weather. Horehound finds The White Stripes man in full-on supergroup mode, whipping up 11 tracks from an incredibly raucous 21-day session in Nashville with The Kills‘ Alison Mosshart, guitarist Dean Fertita of Queens Of The Stone Age fame, and Greenhornes/Raconteurs bassist Jack Lawrence.

And boy do this lot make a mind-blowing racket. Kicking off with 60 Feet Tall, Mosshart lends her lusty vocals to menacing backing as riffs roar and squeal, White’s rhythms rattle, pound and rumble and bluesy, piano and organ-tinged cacophonies explode around beguiling melodies.

The debut is by no means a hit-packed record, pop is firmly on the backburner here and thrillingly it’s precisely this lack of obvious choruses and instead the bizarre little instrumental interludes, spooky stripped down ballads which build and build and attacking grooves that will have you coming back time and time again to it.

Vocals are divided between Mosshart and White throughout, who sound like they were made to duet together, untamed and fierce and clearly egging each other on during recording to see who can sound more deranged and wanton. Answer? Both. Equally. And highlights come thick and fast; Hang You From The Heavens, Treat Me Like Your Mother, I Cut Like A Buffalo and New Pony are dark, aggressive and dirty stand-outs, and on the softer side, although by no means gentle, Will There Be Enough Water? makes for an affectingly quiet closer.

They sprinkle in a spot of Dylan with New Pony, and in Mosshart’s lips the weirdly compelling couplets and rhymes work a treat as she purrs: “I had a pony and his name was Lucifer”. Elsewhere it’s all manners of wrong hearing her and White croon “I’m just like your mother” on Treat Me Like Your Mother.

According to recent interviews with the foursome, there is a Dead Weather follow-up on the way. And right now, when he is on such outstanding form as this playing away from home, we’re in no real rush for Jack White to return to his day job. More of this and soon please.