The Dead Weather – Sea Of Cowards

by John Murphy
published: 10 May 2010 in Album Reviews
Tweet 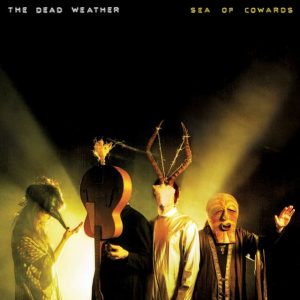 While one band may be enough for most people, it’s obviously not for Jack White. Last year, in addition to The White Stripes and The Raconteurs, he formed his third band with Alison Mosshart of The Kills, Jack Lawrence of The Raconteurs and sometime Brendan Benson collaborator Dean Fertita.

The first Dead Weather album, Horehound, brought home the realisation to that not everything Jack White touches turns to gold. While Mosshart made a fine foil for White, all too often the album descended into self-indulgent blues jamming – the fatal error of a band sounding like they’re having a terrific time, while failing to pay any attention to the poor listener.

Sea Of Cowards arrives a mere 10 months after Horehound, and as you may expect from such a rushed release, the same old problems remain. It’s not all a dead loss; the first few tracks are up there with the best of White’s other work. Yet the momentum fails to keep up.

But it does start in superb fashion. Blue Blood Blues is a genuinely exciting coiled spring of a song, with White on lead vocals amid corruscated flashes of guitar. It’s so thrilling you can even ignore the odd lyrical clunker like “shake your hips like battleships”.

It perfectly segues into Hussle And Cuss, featuring a terrific bassline from Lawrence and some typically sultry vocals by Mosshart. It sounds fantastic, capturing a real swampy-blues feel and the band members play off each other brilliantly.

However, the main problem with Sea Of Cowards is that it is somewhat ‘front-loaded’. While the first two tracks are excellent, and The Difference Between Us is similarly fine but with added synths, too many tracks dip into formless jams. I’m Mad basically consists of Mosshart reciting “I’m mad, haha”, while the second half of the record is overloaded with self-indulgent riffs and dated sounding sludge like Gasoline.

Although Die By The Drop, with its thrilling call and response duet between White and Mosshart, raises the tempo somewhat, No Horse and Looking For The Invisible Man both suffer from a horribly muddy production and no sense of a memorable tune whatsoever.

Jawbreaker injects some urgency back into the album, but it’s all a bit too late by this point. Rather like Horehound, this second album works in flashes, but listening to it all the way through proves to be something of a labour. There is some real chemistry here, but for the third album, it may be advisable to pay more attention to quality control in order to make the truly epic album that is doubtlessly lying somewhere within The Dead Weather.