The Decemberists – The King Is Dead 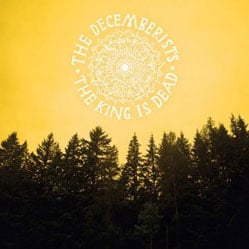 Given their literary, fairy-dusted position in the realm of indie rock, The Decemberists’ 2009 album The Hazards Of Love could’ve served as their self-parodying demise. Its predecessor The Crane Wife certainly flirted with wide-open theatricals – songs marked with Pt. 1, 2, and 3 tend to turn albums into self-contained stories – but it got nowhere near the indulgence of Hazards. Something of a rock opera, despite its dizzying scope and flat-out goofiness it encompassed exactly the kind of record nobody expected The Decemberists to ever make.

However, maybe as a response to the critical kiss-off, The King Is Dead lands on the exact opposite side of the barometer. While Hazards crammed preludes, reprises and character roles into 17 tracks, this new work is a breezy stroll down the band’s folkier tendencies, getting away from arc-swollen concept album territory and back to what originally made the band great – pastoral, warmhearted melodies and briskly written lyrics.

As the pre-release buzz promised, The King Is Dead is a more country-driven affair than before. The first sound to be heard on the album is a siren, almost atonal blast of Bob Dylan-esque harmonica. Pedal steel appears and reappears throughout, and often Jenny Conlee joins Colin Meloy’s trademark tenor in a Conway/Loretta throwback dynamic. But these aesthetics are mere stylistic choices. The Decemberists certainly haven’t written a country album; they’re just colouring their songs a little differently. The focus, as always, is thankfully centred on Meloy’s knack for storytelling.

His nasally cadence has never been for everyone, and his word choice still overlaps with The Canterbury Tales, but these narratives are easy to fall in love with. He’ll turn a song about a biblical apocalypse into a quipping, semi-sarcastic reminiscence on human survival (Calamity Song), or rhyme “Thrushs’ bleeding battle with the wrens” with “disrupts my reverie again” (June Hymn). As always the depth of his poetry separates The Decemberists from the bulk of the folkies, keeping repeat listens refreshed and revealing. But the band are still crowd pleasers at heart. The big “1, 2, 3!” chorus on the workman’s anthem Rox In The Box and the penultimate smasher This Is Why We Fight are both built for audience participation – Why We Fight in particular even out-crests the band’s other anti-war bombast 16 Military Wives in its broad, five-minute march.

All together The King Is Dead might seem a less substantial work when compared to the towering (albeit overstuffed) previous efforts, but honestly it’s nice to see The Decemberists get back to being a rock band. Their dalliances in crossover concept albums were at the very least entertaining, but they truncated their raw artistic talent in favour of flashy, but thematically limited fairytales. The King Is Dead sinks back down to the real world, where there’s no forbidden love, nor transformed cranes or disgruntled queens. Instead the songs are about concrete ideals – the beauty and the sullying of nature, grinding out a living, the folly of war – all explored with sprightly country-folk and surgical word choice. The album may not be as majestic, but it’s certainly a lot more real.