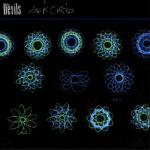 Every now and again in music you get a blast from the past. The surprise return of someone that, in their own time, was a legend, but who has subsequently fallen from the public’s consciousness. These comebacks aren’t necessarily a good thing. Kevin Rowland‘s cross-dressed return, including a cabaret slot on Reading Festival’s main stage, was painful to watch and was rumoured to be one of the reasons behind the collapse of one of Britain’s most influential record labels, Creation.

But the pop star is a funny beast, and, unable to rest on their laurels, Duran Duran founder members Nick Rhodes and Stephen Duffy, a.k.a. The Devils, are back nearly twenty years on with a new album, Dark Circles.

While Duffy may have left Duran Duran before the arrival of the icon, Simon Le Bon, it is still reassuring that Dark Circles is not an attempt to recapture the ’80s pop hits heyday, but to go back further, to the beginning.

But while the early intentions of the project may have been to re-visit the late ’70s, using original tapes and analogue synths, the resulting album covers decades. Dark Circles opens with a salvo of looped drums and keyboard strings that seems to be firmly rooted in the Kraftwerk electropop days of old, but when overlaid with guitars and monks’ chants it gives an edge that sets the agenda, that this album is not just a historical re-enactment.

Come Alive, with funky electro beats and vocoder backing could easily be the next Kylie single, the dark ambience of Hawks Don’t Share could be Air or a downbeat Primal Scream.

Straying further afield across the genres, Newhaven-Dieppe stumbles across the transatlantic cutesy indie-pop of Fountains Of Wayne and Grandaddy, while the building grind of closing track The Tinsel Ritual has hints of Doves and the pulsating soundscapes of Mogwai.

While Dark Circles may contain a whole host of intriguing and exciting moments, there are inevitably times where it doesn’t always work. The Kerouac-like lyrics of Aztec Moon with a dark pared-down backing really lacks punch, but only the reflective ‘Barbarellas’ appears to suffer from terminal Kevin Rowland duff track syndrome.

Neither an attempt to rekindle the Duran Duran flame, nor a renaissance of the early days of electropop, Dark Circles is a little of everything, old and new, past, present and future. The Devils may well be pioneers from back in the day, but with 1978 attitudes and equipment they’ve created an album that sounds remarkably fresh in 2002.

The Devils MP3s or CDs

The Devils on Spotify

More on The Devils
The Devils – Dark Circles