The Districts – You Know I’m Not Going Anywhere 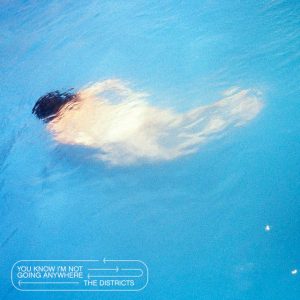 The Districts‘ last record, Popular Manipulations, was a short, sharp blast of intense psych-tinged indie rock. Produced by the maestro John Congleton, it ran the full gamut of psychedelic sounds, from the eerie space-pop of Violet to the raging, locked-in grooves of If Before I Wake. It was an incredibly mature and accomplished record for a band who were on their third record by their early twenties. The band, led by singer Rob Grote, never sounded anything less than stellar, and the wait for the next record has been tough.

Now with a three year gap behind them, The Districts have released You Know I’m Not Going Anywhere, which demonstrates a band who have opted to streamline their previously scrappy sound, and add keyboard and synth flourishes to key melodic passages when that would have seemed utterly unthinkable on their first few releases. Put simply, The Districts are all grown up.

All of the songs here have a much wider, more spacious production than their previous output, with much more focus on the refined, sophisticated songwriting. Take the opening pair of My Only Ghost and Hey Jo, for example. The former submerges all of the instruments and the vocals in an ocean of reverb, while the latter evokes the finest New Wave pop of the early ’80s with jangling guitars and massive-sounding percussion. Just a few years ago, this kind of sound would have been unthinkable, but now it seems like the obvious next-step for the band.

The stylistic changes are consistently well-chosen. Cheap Regrets brings swelling synths and motorik rhythms to the fore, lending The Districts more than a whiff of Deerhunter or their more accomplished acolytes (Wild Nothing, Beach Fossils). Velour and Velcro, with its sinister synths and thunderous percussion, evokes early U2, while the woozy, romantic Changing has more than a hint of Mazzy Star about it.

The Districts then gear their sound towards the operatic post-punk heft of Echo & The Bunnymen on Clouds, and then have a stab at ghostly serenity of Fleet Foxes on Dancer. Both Descend and 4th Of July begin with a soft acoustic ambience, before reverb and layers of loops come in to distort both tracks, transforming them into something more than a little haunted.

One track completely blasts away the others in terms of stylistic risk. The sheer raw power of Sidecar, with its enormous walls of guitar and breakneck pace, is a welcome respite from all of the bruised melancholia surrounding it, and a sonic reminder of the kind of intensity the band can summon when they want to.

This is a fantastic record, and yet another reminder of how good this band are. Nothing seems out of place, not a single riff or beat is wasted. New styles are performed with vigour, and the band sound energised and refreshed. An essential release.

The Districts MP3s or CDs

The Districts on Spotify