by Helen Wright
published: 31 May 2010 in Album Reviews
Tweet 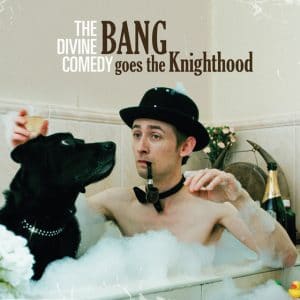 Following 2009’s cricket pop concept album The Duckworth Lewis Method and in between scoring a film and penning a musical, Neil Hannon is revealed to be a happy man on Bang Goes The Knighthood, The Divine Comedy‘s 10th album and first for four years. His state of positivity is clear from the closing track, I Like, a light affair chronicling a very satisfied home life, and the idyllic Belle and Sebastian-esque Cathy Davey duet Island Life, which paints a lovely picture of a blossoming romance.

Across its 12 tracks Bang Goes The Knighthood is a jaunt, with lots of typically wry Divine Comedy jokes, chief amongst them The Complete Banker, which will have us all cheering unless we happen to work in the financial services industry. And then there is the sublimely silly Can You Stand Upon One Leg, featuring the famous Hannon voice holding a (falsetto) note for 28.9 seconds…

But on closer listening, the bite of so many Divine Comedy songs is still there underneath. The title track, in which the anti-hero sneaks in to the underground lair of a dominatrix for a good whipping, risking his reputation, his marriage (and the potential knighthood, of course), contains the heartbreaking line “You make me feel something, and feeling something beats feeling nothing at all”. The haunting waltz-time tune, with slightly incongruous accordion but lovely twinkly piano / harpsichord is vintage Hannon, a character study to rival A Lady Of A Certain Age, from 2006’s Victory For The Comic Muse. Neapolitan Girl, inspired by Norman Lewis’ Naples ’44 wartime diaries, is another breezy number with a very dark heart: the girl in question is a prostitute plying her trade in the cemetery.

Despite such delvings into darkened corners, the overall the feeling is upbeat. The first single At The Indie Disco, with its references to everybody from Morrissey to the Wannadies, harks back to more innocent pleasures and leads in to Have You Ever Been In Love, another bouncy song with a Palm Court backing.

The old sly humour is back too with Assume The Perpendicular, giving a fond poke to the middle classes at play, and The Lost Art Of Conversation is familiar territory bemoaning – well, the title says it all.

The two stand out tracks are opener Down In The Street Below, a lovely bittersweet ballad that ably demonstrates Hannon’s continued ability when it comes to writing a lovely, lovely songs, and When A Man Cries, which begins with very gentle piano and dulcet music-box tinklings and becomes a real emotional tear-jerker, building in intensity and adding subtle orchestration to great effect. It’s the sort of song that perfectly showcases Hannon’s lovely, evocative voice.

It’s always good to have a new Divine Comedy album. Bang Goes The Knighthood doesn’t quite pack the punch of the old days, but there’s still plenty here to enjoy. And if it doesn’t attract a whole new audience, die-hard fans will be pleased the quirky genius is having a good time. “I like the way you make me laugh / I like your brain, both left and right half / I like the songs you sing when you’re bathing / I like the dog, when he’s behaving…” If that isn’t a happy man, we don’t know what is.