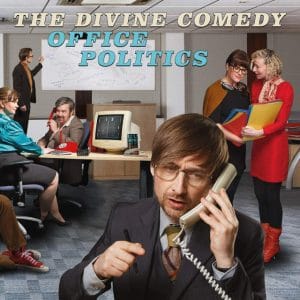 The future, increasingly, is electronic. If you were born before laptops were really a thing, you might have an eternal faith in our digital landscape. Subscription services, Instagram, Twitter and an app we can use to order food because we don’t want to walk three metres down the road to a restaurant have revolutionised our world in a way we’d never have imagined as bright-eyed children.

It makes some kind of sense then that music as a reflection of popular culture should increasingly shift towards the electronic. But what do you get when you mix electronica with the whimsically acerbic chanteur Neil Hannon? The Divine Comedy’s new album Office Politics is a starting point for explanation.

Small beauty then that Office Politics is littered with observations about the more anachronistic parts of our society, exemplified by the packshot’s distinctly ’80s office vibe, all giant telephones and cathode ray tube monitors. But while Hannon’s trademark mindbendingly catchy couplets haunt the edges of the record, this is something of a new Divine Comedy, one with its hands at nine and three on the keys of a synth, driving fast into the electronic future. What’s more, as catchy couplets go, “See that PowerPoint presentation? Worthy of a Bafta nomination” will become your office ear-worm in two seconds flat.

Huge changes, we all know, are best introduced slowly. Accordingly, Office Politics follows a mostly cute song/electro song/cute song/electro song structure. Hannon teases us into this new reality with the first three songs: Queuejumper, an observation of an entitled driver who considers that rules don’t apply to him, is cute; Office Politics is a prophecy, a key to the songs to come; Norman And Norma will warm your heart. Absolutely Obsolete straddles several Divine Comedy styles in one song before bouncing us into Infernal Machines – where the real party starts. As the Personal Jesus-beated, omnichord-spattered, glam rock stroke of genius fires up, we realise, “Oh! This is new!”

In contrast (again), You’ll Never Work In This Town Again transports us to a sexy, electro, wild west Tiki bar – yes, really – full of lush orchestration replete with a parpy brass sample and reverby vocals. Psychological Evaluation, in which Hannon is interviewed by a probing vocoderbot about his habits, fears and dreams, is all Kraftwerkian joy, spilling into tonguetwistingly lyrical spoken words which summon up National Express vibes of the absurd-as-philosophical while sounding nothing like it. It is balanced out with delicious irony from the follow-on, The Synthesiser Service Centre Super Summer Sale – is this where Hannon got his new electronic toy from?

Other highlights include Dark Days Are Here Again, portending doom with occult voices backing Hannon’s musing on the horrors of the world to the sound of the carnival at the end of the world, and I’m A Stranger Here, one of several tracks on this album which would sit happily in the soundtrack to a musical, which returns to a theme of obsolescence and out-of-place-and-time musings. The Life And Soul Of The Party, in contrast, sees Hannon co-opt a shimmery Nile Rodgers-style guitar riff for a disco soundtrack to the party animal of nightmares, while the absurdity of Phillip And Steve’s Furniture Removal Company, based on a whimsical retelling of a business set up by minimalist masters Philip Glass and Steve Reich when times were hard, reaches Sufjan Stevens Christmas Unicorn levels of joy.

After ‘Opportunity’ Knox, which considers the cringe-talking, colleague-stepping social climber who you’ll despise by the end while re-introducing a character who’ll be familiar to Hannon fans, we close out with the cathartic After The Lord Mayor’s Show and the big send-off When The Working Day Is Done, a call to action for those who have to suffer a nine-to-five working week, a victory march to your sofa and hugs with your cat.

In the press release for Office Politics, Hannon says “I’m sorry it’s all so crazy. I do try and make normal pop records. But it always seems to wander off into odd territories when I’m not concentrating.” But, as always, it’s Hannon’s self-perceived “crazy” that makes Office Politics the beauty that it is. If this is crazy, distracted Hannon, then we don’t want him alert, focused, normal. The single best thing about our electronic, digital society is that we’ve built a world of huge variety in which everyone can be themselves – and Office Politics is, as with most Divine Comedy releases, a record with its finger firmly on the pulse of this zeitgeist.