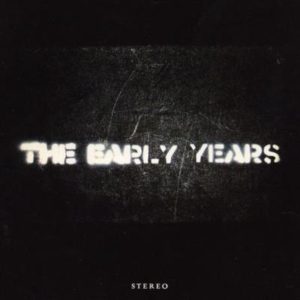 “Where would we be without the electric guitar?” John Peel once hypothesised back in the mid-90s as yet another raucous feedback melee faded. The emotion of his tones revealed a heartfelt gratitude that our lives aren’t soundtracked solely by tinkling pianos, jazz saxophones and mournful cellos. Joyfully, whilst listening to the out-and-out celebration of the distorted Fender that is The Early Years, such a horrifying parallel universe has rarely seemed further away.

Formed late in 2004, this London three-piece display an obvious debt to some of the most celebrated exponents of guitar rock. It’s something they seem happy to admit – citing Spiritualised / Spacemen 3, Neu / Can, Velvet Underground, Mogwai and Nuggets-era psychedelia as the chief reasons for their existence. Not that they needed to spell it out, for even the briefest acquaintance with this, their debut album, reveals them wearing such influences very much on their sleeves. Personally, I’d say it’s the early period, less flaccid and overblown Spiritualised that is easily the most prominent inspiration musically, whilst Roger Makin’s vocals most resemble the long forgotten ethereal splendour of early ’90s shoegazers Catherine Wheel.

Opener All The Ones & Zeroes is a quite remarkable way to start. This was the demo that had Beggars Banquet banging their door down, shoving blank cheques through the letterbox. Featuring a hurtling Krautrock rhythm section, built on by metronomic guitar and psychedelic swirls of vocal mantras, and with an intensity that builds ever skywards, it’s a quite thrilling burst to set the scene. Frankly, a 45 minute version of this track would have done the trick for me.

The pace drops markedly on the wistful Simple Things, but this merely serves to highlight the accomplished songwriting – remarkable for such a nascent act. And what a tune! A swift build up of pace and noise reminds us that they haven’t gone all soft on us, before a mournful ending lets the dust settle. Brown Hearts follows a similar pattern, but again the sheer attractiveness of the melody carries all before it. The effect is classic, epic and grand without sounding forced.

Nine minute Song For Elizabeth features yet another lovely Jason Pierce-tinged chord progression that slowly melts away into a dope-filled-room soundscape, although this along with subsequent long instrumental Musik Der Fruhen Jahre perhaps outstay their welcome eventually – but then again I’m not stoned. Thankfully, new single So Far Gone soon puts paid to this noodling around, rattling along with purposeful delay pedal feedback and, you’ve guessed it, a marvellous melody on top.

Next up is the dramatic High Times & Low Lives, featuring intricate duelling guitar work that wouldn’t disgrace an Explosions In The Sky album along with dramatic slow rises in intensity. It’s a classic “follow that” gig-closing number, but the job of closing this album falls to the quiet acoustic wind-down of This Ain’t Happiness. Perhaps we need the respite.

In the end, perhaps The Early Years haven’t created anything particularly new with our beloved electric guitar, but rarely has a debut album used the instrument so expertly and consistently. Will you like it? Simple answer: if you love their heroes, you will love them too.