by Jordan Mainzer
published: 13 May 2013 in Album Reviews
Tweet 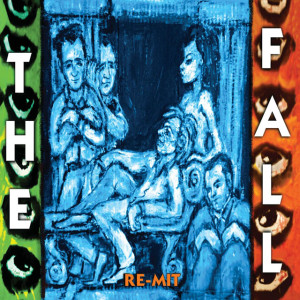 Making it to 30 albums would surely be impossible for most bands or singer-songwriters, but The Fall have always been unrivaled in their prolificity. Re-Mit is indeed their 30th studio album and what seems like their 100th overall album (including live albums, singles compilations and all the rest). John Peel, citing The Fall as his favorite band, famously stated: “They are always different; they are always the same.”

Indeed, throughout their entire career, eternally cranky frontman Mark E Smith has been the drunken, abrasive yet mysterious, song-stealing yet supportive backbone behind a band whose repetitious instrumentation allows their line-up to change without much public notice. Always different, always the same.

It’s disappointing, then, that the The Fall have celebrated their 30-album milestone with a work that sounds like a parody of the band’s past. Even if it starts out with the fun, bouncy, and awesomely titled one-minute instrumental No Respects (and later includes the just-as-fun five minute version with vocals), Re-Mit immediately delves into SNL territory with second track Sir William Wray. Smith is so incoherent you don’t know which Sir William Wray he’s talking about; he might as well be babbling in an unparalleled state of inebriation about American artist Bill Wray. In combination with an annoying organ riff, the song sounds like toddlers banging on their instruments, all competing for mummy’s attention. Just when you think it couldn’t get any worse, The Fall follow up Sir William Wray with Kinder Of Spine, a blues track with a piercing, tone-deaf organ that’s more painfully repetitive than the organ of the previous song.

Fourth track Noise is at least funny. As the title promises, cacophony cycles and loops behind Smith as he sinks his teeth into his guitarist, “nasty-noise Peter”. Noise is self-aware and works as a comedic song, but wears thin after the two minute mark (thankfully, it ends 30 seconds later). Surprisingly, given that while listening to Re-Mit you generally want the two minute songs to end after the first minute, the most worthwhile track on the album is also the longest. Hitite Man is almost six minutes in length but contains enough variation within each cycle of instrumentation to capture the listener’s attention. Shimmery surf pop guitar riffs are conquered by brash, major-chord noise punk backed by militaristic guitar beats, resulting in a riot of a track that sounds like it could have also incited some riots back when The Fall truly mattered.

The album retreats back into the mode of Smith as a crazy homeless guy as he wonders for one minute about the Pre-MDMA Years. This track is the epitome of Re-Mit’s confusion: it’s hard to believe Smith would be actively concerned about timeliness or relevance at this point in The Fall’s arc (besides the occasional drunken jab at a contemporary musician) because the band has always been vital without even sounding like they’re trying. Smith is certainly not making serious commentary about the pre-MDMA years, but the fact that those three words are the only ones audible in all of one minute makes his shtick, which is hilarious and satirically self-important at best, seem a waste of time.

Even the stomping Irish (in which Smith sounds like an older, British version of Isaac Brock) towards the end of Re-Mit cannot save it. Throughout the entire album, you’re left wondering how Smith, who is responsible for some of the most untouchable, spontaneous punk classics of all time, could muster the audacity to purposefully sound like such a parody of his previous self. Maybe that’s the point; The Fall have always been audacious. Yet, even if the joke’s on us for the 30th time, this time, nobody’s laughing.