The Fall – Your Future Our Clutter 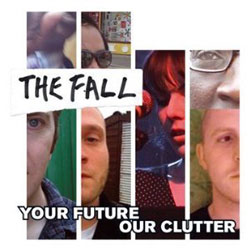 And so, regular as clockwork, Mark E Smith unleashes another album of techno / rockabilly / country ‘n’ Northern clatter upon us. The missus has been called in from the kitchen and shoved behind some keyboards; recently-sacked Fall members have been replaced by a fresh batch of musically untrained ne’er-do-wells from the pubs of Prestwich; and ringmaster Smith has cajoled and threatened them into thrashing out a few chords over which he can bark his surreal rantings.

With its bombastic tone, Your Future Our Clutter isn’t a radical departure from recent Fall outings, but it does have the advantage of brevity. No 11-minute long drones about U-boats here: just nine songs spread over 50 minutes, which – unusually for The Fall these days – can happily be listened to in one sitting without losing patience and slapping on Hex Enduction Hour instead.

Your Future Our Clutter starts well; very well, even. O.F.Y.C. Showcase is vintage Fall – loud rattly drums, crunchy Moog, chuntering bass; Smith bellowing like a pissed-up Old Testament prophet. The kind of brutal, insanely simple, gut-bustingly enjoyable riff we’ve come to expect from The Fall at their best. It could well be their best straight-out rocker since 1995’s The Joke.

Bury Pts 1+3 sustains the high standard, kicking off hilariously with a 90-second preview of the main body of the song, apparently re-recorded underwater. “A new way of recording / A chain round the neck” growls Smith, perhaps by way of explanation, and all in preparation for when the main section eventually does kick in: a no-holds-barred glam stomp guaranteed to have gnarly ageing punks punching each other’s faces in glee at Fall gigs up and down the country in the months to come.

Targets for Smith’s wrath this time round? Well, he seems to have a bee in his bonnet about local government, and has described the themes of the album as ‘municipal’. Not that it matters, as we’d all feel terribly cheated if his lyrics made any sense at all.

“And you will suffer all the seasons on the sides of municipal buildings,” Smith warns. Commissioning colourful murals, it appears, are not the only crimes to have been committed by Bury council. They’re also guilty of “getting rid of vermin like grey squirrels by reading out air marshals’ articles or music recordings on the vile manufacturing community.” Who’s behind all this? “A Spanish king with a council of bad knaves” apparently. “I’m from Bury,” mutters Smith, by way of a chorus. “I’m not from Bury” coos the current Mrs Smith in response.

Mexico Wax Solvent is even more bonkers; a deceptively simple swirl gradually becoming louder, more complex and more cacophonic, until Smith’s vocals are completely buried under the chaos. But not before we’ve learned that “X is the third consonant / they love their government in Mexico”. And that “I don’t make rice with screwdrivers / I don’t fry chicken with a trowel.”

Smith’s singing – if it can be called such a thing – is his best in years. The caustic growl which marred the last couple of Fall albums has softened into something clearer and more intelligible. On the closing track, there’s even a attempt at crooning: not entirely horrible, and something not seen since 1991’s Edinburgh Man. He’s clearly enjoying himself, wrapping his chops with relish around this season’s stream of consciousness.

Sadly, after the excellent opening trio of songs, the quality drops off. It’s not the kind of nosedive associated with many recent Fall offerings, but a mild disappointment nonetheless. Cowboy George is an unloveable two-chord country/post-rock number which meanders into a bubbly, menacing, voice led thing. Y.F.O.C. / Slippy Floor is a Fall-by-numbers foot-stamper. And there’s the obligatory obscure rockabilly cover version, this time Wanda Jackson‘s Funnel of Love.

Your Future Our Clutter is a tight, coherent, rock-out album – and it’s great to see some discipline back in The Fall after years of scrappy offerings. Three great songs, six OK ones; and a headful of bewildering imagery. Maybe we should be grateful after all.