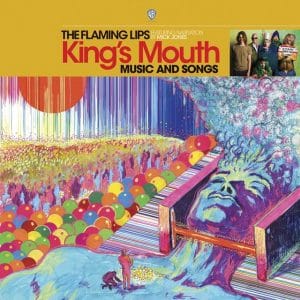 By the time any band gets to their 15th studio album, you’d think that any preconceived notions of what you would find within would be absolutely confirmed. But The Flaming Lips don’t usually do things one might consider to be conventional, and they never have.

There are, much to the band’s credit, about four or five different jumping-on points in their massive catalogue. Perhaps, like most, you found them through their epic, world-beating, Spiritualized-sized The Soft Bulletin. It is, by any metric, a classic and a contender for ‘best album of the ’90s’. Their next album, the connoisseurs’ choice, was also a masterpiece. Yoshimi Battles the Pink Robots has found fans from across the musical spectrum, proving to be an influential work for future collaborator Miley Cyrus, Father John Misty, Kacey Musgraves, and Central Perk’s own songstress Phoebe Buffay.

Alternatively, perhaps you found them through their Sonic Youth noise pop phase, with an album like Clouds Taste Metallic or through a more recent effort like Embryonic or The Terror. All of these entry points only show what a wild, kaleidoscopic trip it’s been for Wayne Coyne, Steven Drozd and Michael Ivins. It also means that pretty much every new album from The Flaming Lips is a risk, because you never know what you’ll find within.

The simple points about King’s Mouth are these. Firstly, the album is a vast improvement on the rather drab Oczy Mlody. Like all Lips albums, it was warmly received, but had very little staying power when compared to some of their other low-key growers like At War with the Mystics or Embryonic. Oczy Mlody was pared back, stripped down and devoid of a lot of the personality that we have come to expect from these guys. While King’s Mouth is similarly quite sparse, there is a gleaming electronic edge that suggest careful construction, and a hilarious narration throughout by Mick Jones of The Clash, that more than makes for how self-indulgent that idea could have been.

Secondly, there are some great moments to be found on King’s Mouth – Mouth Of The King, The Sparrow and Feedaloodum Beedle Dot (really), are some of the strongest tunes the band have put out in the last fifteen years. …Beedle Dot is all sugar rush, hyper-caffeinated funkiness, while Mouth of the King is tender yet stately, filled with the kind of aural sunshine that comes naturally to the Lips. The Sparrow (not related to The Sparrow Looks Up At The Machine from Embryonic), probably the highlight of the album, is a pleasant surprise in that it plays out like something from Foreigner or Yes‘ early ’80s heyday. Giant Baby, another album stand-out, is classic Flaming Lips, an ode to the joyousness of youth, the power of nostalgia, and the horror of grief. If the band have ever made you weep before, this one will have you tearing up.

Finally, despite the band’s history of overstuffing their projects to the point of collapse, King’s Mouth is brief, succinct and easily replayed. It doesn’t overstay its welcome – something previous albums have been guilty of: every studio album in the last decade, including the collaborative and cover albums, have been or over sixty minutes, while King’s Mouth is just over forty.

This is a brisk, bright and joyful album from a band who have been anything but those things in recent years. It’s recommendable for those attributes alone, but even more so when you start to get the feeling that this could herald a return to form.