The Flaming Lips – The Terror 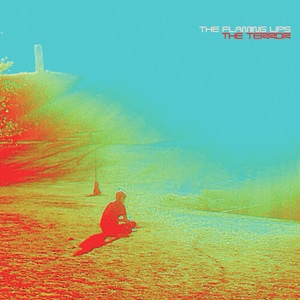 The Flaming Lips have been in a state of constant flux for the last two years or so as Wayne Coyne, Steven Drozd and company have stretched the limits of music, delivery, collaboration, and sanity. After such vehicles as life-sized gummy skulls and foetuses, the “strobo-trip” animation toy, and blood-filled limited-edition vinyl records, the limitations of a standard full-length album seem almost too narrow for the newly expanded and constantly expanding Lips consciousness.

The Terror, the band’s first studio album since 2009’s heavy and chaotic Embryonic, is the next step in the natural evolution of the band’s sound – the culmination of all the experimentation and introspection of the last two manic years. When they debuted the album live before a crowd of 15,000 beguiled onlookers on the banks of Austin’s Lady Bird Lake at this year’s SXSW, Wayne Coyne – cradling a lifeless and unblinking baby doll hooked up to a network of strobing and writhing feeding tubes strung from the light riggings and pulsing with weirdness – promised the crowd something radical. The Terror is that promise fulfilled.

On the classic 1999 album The Soft Bulletin, they challenged themselves to not resort to guitars, preferring instead a lush backdrop of MIDI strings and orchestration. This time around, the same challenge seems to be in effect, but in place of transcendent beauty, The Terror is imbued with a harsh, difficult sense of claustrophobia, disjointedness, and cognitive dissonance. The electronic soundscape is almost constantly overblown and abrasive, but between moments of terrifying sonic destruction come fleeting but wonderful swells of the beautiful uncertainty of what it means to be human.

A repetitive mechanical hiss signals the album’s opening. Look… The Sun Is Rising builds to a pounding interplay of Kliph Scurlock’s heavy drumming and Drozd’s winding synths. Coyne’s trademark shaky tenor is buried in the mix here and wrapped in a disquieting gauze of distortion and reverb – as it is throughout much of the album – as if broadcast from a great distance. The 13-minute epic You Lust is built on the most fragile of backbones; Coyne’s harshly rasping “Lust to succeed” refrain hints at the deep unquiet that threatens to leak out at the edges.

The immediately beautiful Try To Explain is the album’s first hint at the Lips’ pop leanings, Coyne’s voice soaring and ethereal over a wash of sweeping electronic strings. “I believe you,” Coyne sings. But his usual optimism is buried beneath something far darker here. It’s no coincidence that the new Flaming Lips stage show does not involve confetti cannons, giant balloons, or dancing audience members in the wings. Both the title track and You Are Alone find Coyne trying out a nearly whispered falsetto soaked in an impossible amount of reverb. The effect feels a bit like falling down a well and seeing only a fleeting, narrow swathe of the night sky for eternity. Turning Violent is the album’s most dissonant, unrealised moment and its simple refrain gives cause for concern.

The Terror is a difficult listen that does not stand up to casual listening. With each passing experiment, it becomes clearer and clearer that there will never be another Soft Bulletin or Yoshimi. But while there is nothing as immediately optimistic or singable as Do You Realize?? here, the nine songs that make up the album contain a new and unmatched sense of depth and honesty among the rest of the Flaming Lips catalogue. While The Terror feels at first glance like an exercise in noise and disintegration, repeated listens reveal it to be a dark, challenging, and ultimately rewarding work of genius. It may be their best yet.