The Frank And Walters – Beauty Becomes More Than Life 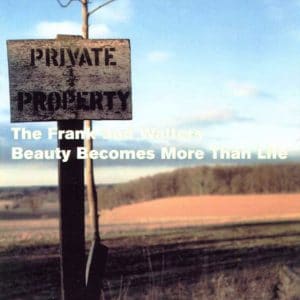 Try as I might, in typical critic fashion, to pigeonhole The Frank And Walters‘ Beauty Becomes More Than Life and, despite it superficially lending itself to pigeonholing without fuss, it simply won’t fit. Is it a guitar band offering? Is it a synth-based crossover record of sorts?

It’s not that there’s anything especially out of the ordinary here. The lyrics to every song on this album are variations on the very personal and at times touching themes of not wasting love, being hurt by love and being lonely, having faith in a loved one who doesn’t believe in you and much more in the same vain.

It is certainly rooted in the personal, but it would all be rather depressing were it not for Rob Kirwan’s production, which in places seems to belong to another record.

The weird effects work well on tracks like Until the End, with synths playing a larger part in proceedings than we’ve been used to with this band, but in other places it seems, even after several listenings, as if the effects have been added just to cheer things up, trying to make a heartfelt record into a pop offering. But for all that this is not a bad record – it is a progression from the musical territory previously inhabited by The Frank and Walters.

The last offering from this band to grace my CD player was a glorious, raw guitars effort called Fast Anthony, a track that reminded me of the old Amersham Arms gigs in New Cross, south London, at which (at the tender age of 17) I was frequently to be seen moshing to some heavy rock pub band or other. In that their previous efforts brought back such memories for me I was reasonably partial to them; they do this stuff very well indeed.

Yet Beauty Becomes More Than Life is not a heavy rock pub band effort. I challenge anyone to find a mere pub band who could put together tracks like Stop, Until the End, 730 (especially…) and Don’t Stop. These are in their ways great tunes, with lyrics that are, while very simple, straight from the soul.

If Paul Linehan, Niall Linehan and Ashley Keating, for The Frank and Walters they are, were in any doubt as to which track to release as a single from this LP, it would have to be Don’t Stop, which is simply a tour de force. On this track Kirwan’s production enhances rather than smothers their guitary sound. The rest of the album meanders along and lyrically winds up roughly where it started – lonely, ever so slightly confused and annoyed with the whole love thang.