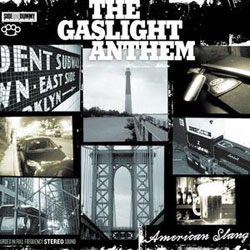 As far as patronages go it doesn’t get much better than Bruce Springsteen lavishing praise upon you. The Boss played with The Gaslight Anthem at Glastonbury and then Hyde Park last year, lending his vocals to the stadium-sized ’59 Sound – it was something of an occasion. When Bruce landed on his arse halfway through his own set yelling “help me out here, I’m a fucking old man” it felt a little like the giant once described by Jon Landau as “the future of Rock ‘n’ Roll” was passing the baton on to his young charges.

The Springsteen comparisons The Gaslight Anthem have garnered are warranted for the most part. The anthemic quality of American Slang and Brian Fallon’s well weathered vocals nod to his influence, while the chanted backing vocals evoke The E Street Band in their pomp. However, for all of the similarities, there are enough differences to set them well apart from the man Little Steven might well refer to as “The Employer”.

Most notable is the band’s desire to get to the payoff quickly. There’s no hanging around for exposition, no six-minute Thunder Road style epics here. If there’s a way to turn a ballad into a fist-pumping cathartic release, Fallon and his cohorts make it possible. The unrelenting put downs of Old Haunts, for example, develop an uplifting spirit purely through the strength of melody.

At times they’re far closer to The Clash in terms of delivery – a pop sensibility coupled with an irresistible brash edge. The swing of The Lower Queen Of Chelsea in particular bites with a Strummeresque charm as it swaggers along with a reggae-infused bass line and a simplistic guitar part, Fallon chastising a little rich girl who fails to make the most of her life.

Fallon’s understanding of the redemptive power of music elevates American Slang from being a good record to a great one. He sings about time spent alone with records as a form of therapeutic escape (Lower Queen Of Chelsea again) and assumes the role of protector and shaman, shaking the listener and pointing out the way forward. “Give me the fevers that just won’t break, give me the children you don’t want to raise,” he growls on Bring it On, while on Spirit Of Jazz he becomes a healer: “Only I can heal your wounds when you can’t go on.”

Elsewhere he’s extolling the virtues of being true to one’s self. Orphans’ tale of relentless, determined work ethic or the spirited rock of Stay Lucky, which implores the listener to get off their arse and make something of themselves, are capable of touching people’s hearts, rather than tickling their ears.

They close the album with We Did It While We Were Young. Unusually low key and maudlin, Fallon evaluates his life in the church of rock; hollering at the altar. “There are no reasons to believe. I burned my faith on the block,” Fallon emotes with genuine passion, in desperate need of the protector side of his psyche to make an appearance.� It’s the most spiritual song here by some distance, suggesting a different direction for The Gaslight Anthem in the future beyond straight up rock songs.

For now it’s their straight talking and honesty that will push them into the spotlight and, with Fallon at the helm, they will make the most of it. This is the future of rock ‘n’ roll.