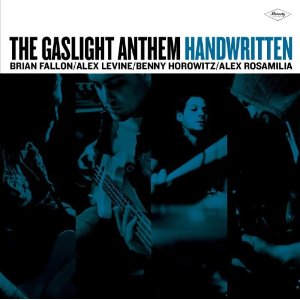 The Gaslight Anthem are the Quantum Leap of modern rock bands. It’s as if a whole group of Samuel Becketts jumped into the bodies of 21st century musicians and cannot leave until they craft a record that perfectly cut-and-shuts Bruce Springsteen‘s most tub-thumping instincts with a dash of ’60s throwback and a sprinkling of desiccated hardcore tropes.

Performing live with The Boss himself could have just been a fulfilment of The Gaslight Anthem’s dreams or actually a sneaky way of harvesting actual DNA from the ageing agitator. That’s unclear, but it’s certain that Handwritten, the band’s major label is a shameless continuation of the strategy to go bigger and Bossier.

45 opens the album with yelps, big guitars and a lyrical analogy to vinyl records that is the most wilfully anachronistic thing this side of Jack White’s wardrobe. There’s a shameless cheesiness to a chorus like “Hey! Turn the record over. Hey! I’ll see you on the flipside…”. The Gaslight Anthem do that; they make big-hearted, big-lunged rock’n’roll songs that clatter through earnestness and intensity. To a world bathed in irony and sarcasm, that can seem a little odd. But somehow it works.

The title track, Handwritten, comes from that same backward looking place. Just as 45 is about music in its old-fashioned form, it celebrates not the click-clack of keyboards or the silent production of gently tapping tablets but the scritch of pen on paper. The guitars are as relentless as Brian Fallon’s vocals. This is a band utterly committed to the artifice they have spent years building; the leather jackets, the sailor tattoos, the girls who broke their brittle hearts.

Here Comes My Man slows the pace down a little, finally allowing the guitarists a little rest with a slower tempo, and finds Fallon in more reflective mood. Mullholland Drive takes things a little darker with what appears to a destructive sounding love story – there’s choking and emotional blackmail in there. It’s a welcome change of gear but hardly Nick Cave doing murder ballads.

Oddly, the guitars on Keepsake almost recall Oasis in places. It’s not a song for keeps but more of a filler as the album sags a little in the middle. Too Much Blood – surely a title more suited to AC/DC – has Fallon pulling out his more gravelly range, seeming almost Joe Cocker-like at points. There’s a whole lot of heart there. But by this point in the record, a listener could be forgiven for wondering when The Gaslight Anthem will step it up a notch.

That comes with the crackle and fizz of Howl, which drags the tempo back above funereal and goes straight for rock radio. Alongside 45, Howl most throughly recalls the band’s breakout second album, The ’59 Sound. Biloxi Parish keeps things big and stomping and the trend continues in the woah-oh-woah laden Desire.

Mae is another one of those now trademark Gaslight Anthem ballads celebrating a idealised kind of throwback gal with “Bette Davis eyes”. Finally, National Anthem closes the record with the electric guitars packed back into their flight cases and the acoustic guitar in full effect. It’s a hymnal to the American spirit, the American spirit from 1955 to be precise.

Our cynical side twitches and kicks at swallowing what The Gaslight Anthem serve up. They sing of a cartoon world of ’50s icons. They are that guy in your local indie club who dresses as if he were a minor character in On The Road rather than a chartered surveyor with too much credit card debt and a vinyl collection he shouldn’t keep adding to.

Fallon too plays a character, even if that’s a character he lives every minute of his life; a Kerouac-worshipping, cadillac-driving preacher with ill-advised tattoos and an awesome haircut. The Gaslight Anthem do what they do incredibly well but they do it without much humour or subtly. Live, with three beers inside you and friends around you screaming along, these songs will be even more vital.

If you love big guitars and vocalists who can’t help but throw in woah-oh-woahs and yeah-yeahs, you’re going to love this record. It is not an album for the sarcastic or the cynical. On the right day and in the right mood, you could find this inspiring. In the wrong mood, on the wrong day, it’ll seem cheesier than a romance novel made entirely of brie.