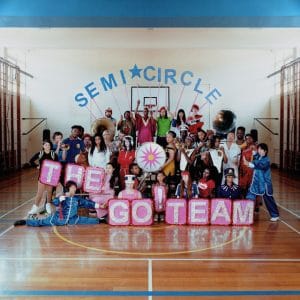 It seems somehow wrong that a band as youthfully vibrant and energetic as The Go! Team should be now entering their fourteenth year. Their maximalist, sunshine-infused, fluorescent-coloured pop hasn’t veered too far away from the formula established on their 2004 debut Thunder, Lightning, Strike and new album Semicircle continues their fine run of recent releases.

For their fifth album, band leader Ian Parton found inspiration in the city of Detroit, both in its musical past and present. On the latter it is most evident it in his recruitment of the Detroit Youth Choir to contribute to the record. This also happily tied in with Parton’s aim of trying to capture the rawness and spirit of the music of marching bands. Yet, arguably the most noteworthy development on the album is its elevation of brass over all other instrumentation.

Mayday sets the standard, underpinned by a heady brass riff and powered by the choir’s uplifting vocal contributions (not to mention some pleasingly manic morse code overlays). Semicircle Song sees the choir dominate again but this time on a more individual basis, as they introduce themselves and their star sign during the course of a song that could easily be the theme to an American children’s television programme.

When planning the album’s creation Parton also continued his trend of subsuming new musicians and singers (especially those with no formal background in music) into the band. The bubble-gum pop of The Answer’s No – Now What’s The Question? features Houston-based Darenda Weaver who Parton found online while Annelotte de Graaf of Amber Arcades contributes vocals to the boomy yet feather-light Plans Are Like A Dream U Organise. If There’s One Thing You Should Know meanwhile bounces around with an innocent joie-de-vivre, largely due to Angela ‘Maki’ Won-Yin Mak’s airy and endearing vocals.

Samples seem to be used more selectively than in the past, although on the one occasion they are deployed on All The Way Live they hit the spot with pinpoint accuracy. It seems tailor made for Ninja to handle when played live – her zesty highpoint on Semicircle comes on She’s Got Guns which is helped somewhat conversely by being one of the few tracks on the album not to be overladen with brass.

Chico’s Radical Decade radiates light, recorders firmly to the fore, and unexpectedly recalls sunshine pop practitioners The Free Design. The stuttering, amplified exhortations of Hey! fare less well however. It may be one of the most overt and undiluted musical representations of The Go! Team DNA but it quickly feels a little too obvious and excessive. Yet, thankfully it’s a rare off note. As Getting Back Up rides out the album on the back of some more glorious brass melodies, it proves that not many make pop music that leaps off the page so high and vividly as The Go! Team.