The Good, The Bad & The Queen – Merrie Land 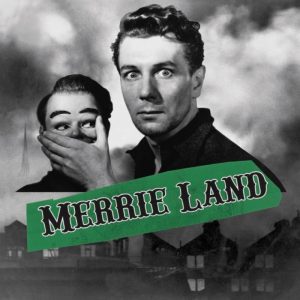 “A stroppy little island of mixed-up people” was how Damon Albarn memorably described the United Kingdom in a song called Three Changes from The Good, The Bad & The Queen‘s debut album back in 2007. At the time it was an amusingly grumpy reference from the man who’s a bit of an expert at nailing the national psyche. More than a decade on, and with Brexit on the horizon, it seems a horribly prophetic line.

A new album from Albarn’s ‘supergroup’ is one of 2018’s more pleasant surprises. At the time, the collaboration between the Blur frontman, The Clash‘s Paul Simonon, Simon Tong from The Verve and Afrobeat legend Tony Allen seemed like a one-off, and the years of silence that followed seemed only to confirm that. Yet it seems wholly appropriate that at this time of intense debate about what our national identity should be, that The Good, The Bad & The Queen’s second album arrives.

Merrie Land was mostly written by Albarn as he travelled around towns of the north of England, in particular Blackpool, and that makes perfect sense when you hear the record. There’s a weirdly woozy feel to much of Merrie Land, the sort of music you’d expect to hear emanating from a sparsely populated funfair – poignant, unsettling and strangely hypnotic. As with the debut, there’s no funk workouts a la Gorillaz, nor any of the upbeat anthems that Blur made their name with. This is Albarn at his most downbeat and wistful.

It mostly works beautifully – indeed, the opening title track is one of the very best things that Albarn’s been involved in. It’s a simple, direct (“this is not rhetoric, it comes from my heart”) address of the state of England, and it’s impossible to listen to without the spectre of Brexit haunting proceedings: “If you’re leaving, can you please say goodbye” runs one line, and there’s also mention of “silver Jubilee mugs” and talk of rebuilding railways and firming up the roads because “no one is leaving, now this is your home”. While the lyrics will attract most attention, it’s Albarn’s voice that’s most affecting – he sounds genuinely choked up on his most emotional vocal since Blur’s Tender.

This vein of melancholy regret runs throughout Merrie Land. The Last Man To Leave is Albarn at his most pointedly political, a disorienting, almost stream-of-consciousness ramble which touches on Windrush, “manicured lawns of England barricaded in the Fifties” and ends on the question “now I’ve gone away – what will you do?”. It’s not too hard to imagine who and what Albarn’s talking about when he sings about “the story that they flaunted around and hoiked us all”.

Musically, some may lament the lack of an obvious single or be disappointed that it’s all a bit low key but, given time, these haunting little odes work their way under the skin. Gun To The Head has a memorable chorus of “we don’t care, ‘cos we’re all animal lovers”, and Lady Boston is utterly gorgeous, enhanced by the use of a Welsh male voice choir towards the end which should melt the stoniest of hearts.

Despite the ‘supergroup’ tag, this is very much Albarn’s album – there’s not much sign of the rhythmic pyrotechnics we know that Allen is capable of, nor many of Simonon’s brooding basslines (although The Truce Of Twilight certainly has some of the swagger of The Clash’s best moments) . Instead, this is Albarn doing what he does best: chronicling the zeitgeist, looking at the ‘stroppy little island’ and, to quote a certain other songwriter, asking himself ‘how did we get here?’. How indeed we did get here is something that will no doubt be puzzled over for years to come, but Merrie Land feels like the perfect soundtrack for these uncertain, worrying times.