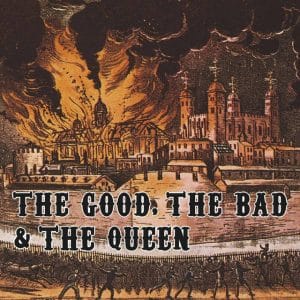 1994. The Conservative government is floundering, there’s a bright new attractive Leader Of The Opposition to entrust all our hopes and dreams in, and there’s an overwhelming feeling of optimism on the streets. Blur‘s Parklife is the soundtrack of the year, and its witty, deceptively upbeat songs blare from every car window and shop changing room.

2007. That very same Leader Of The Opposition is now a discredited Prime Minister accused of leading us into an illegal war, terrorism and extremism is rife and the mood is that of paranoia and fear. About time for a sequel to Parklife don’t you think?

If The Good, The Bad & The Queen really is the much trailed spiritual successor to Blur’s most successful album, then it’s fair to say that it reflects the country’s changing mood perfectly. Broody, wistful and steeped deeply in melancholy, it’s far to say that you won’t find Phil Daniels taking time out from Eastenders to record a cheery cameo here.

Damon Albarn’s new collective (it’s not a supergroup apparently) is dominated by two figures – Albarn himself and Clash bassist Paul Simonon. Former Verve guitarist Simon Tong and African drumming legend Tony Allen (namechecked in Blur’s Music Is My Radar, fact fans) may be there, but it’s the looming basslines of Simonson and the plaintive vocals of Albarn that live long in the memory.

While none of the songs here are as instant or catchy as Blur or Gorillaz, what Albarn has succeeded in is creating a beautifully atmospheric record – one to submerge yourself in and listen to in full, rather than in bite-sized chunks. At first listen it may just wash you over a bit, but give it a couple of plays to sink in and it’ll soon cast its magic.

Opening track History Song sets the mood perfectly, Tong’s scratchy, soft acoustic guitar motif giving way to Simonson’s doomy bass chords and ominous backing vocals, before Albarn chips in with lyrics about watching “ships across the estuary” and spending “Sundays lost in melancholy”. You can almost imagine gazing over the Thames on a particularly overcast day as it plays.

Everywhere, there are lyrical motifs hinting at today’s troubles. Tidal waves are mentioned in Green Fields, Northern Whale is dedicated to the whale which swan up the River Thames last year, Kingdom Of Doom describes people who “drink all day for the country’s at war”, and the brilliantly frantic Three Changes has possibly the key line of the whole album when it refers to the country as “a stroppy little island of mixed up people”. Lyrically at least, Albarn has never been on better, or more perceptive, form.

There’s more references to floods and tsunamis in the gorgeous Nature Springs, possibly the first song ever to use the word ‘oceanographers’, while the magnificently brooding Herculean informs us that “everyone’s going to heaven slowly”. It’s true that at times you do want to give Albarn a good shake and say “it’s not all that bad mate”, but it’s compulsive listening.

The mood throughout is pretty low key, with only the almost jaunty, Kinks-like piano chords of Kingdom Of Doom and the closing jam of the title track coming close to upbeat. Those who are eager to hear how Allen’s much celebrated Afro-rhythms are incorporated into Albarn’s songs are likely to be disappointed – his work here is very subtle with only Three Changes really showing off how brilliant a drummer he can be.

Producer Danger Mouse also shows his versatile streak throughout, creating an entirely different type of mood to that of Demon Days or Gnarls Barkley‘s St Elsewhere. He is, without a doubt, becoming one of the key producers of the day.

This is possibly not an album for those wanting immediate hooks and satisfaction, but it’s a remarkable achievement and more proof – if any were needed – that Albarn is one of the most innovative and talented songwriters of his generation.