by Sam Shepherd
published: 19 May 2013 in Album Reviews
Tweet 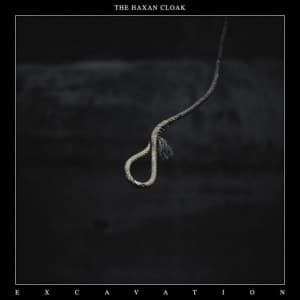 Conceptually, Excavation follows directly on from the end of The Haxan Cloak’s eponymous album. Whist Bobby Krlic’s debut album concerned the last days and hours before death, Excavation explores what happens in the afterlife.

Hopefully Krlic is way off the mark because frankly, if the post-death experience bears any resemblance to the way Excavation sounds, passing on shouldn’t concern us, but what happens afterwards most definitely should. In this regard, this is an album that isn’t too far away from Coil’s sadly rejected soundtrack for Hellraiser. Both works concern the possibilities of what awaits after death, and the artists behind the albums are capable of “making the bowels churn”, to paraphrase Clive Barker.

Excavation might not be a soundtrack album, but Krlic’s writing process does involve getting into character and plotting out exposition. As such, this is not so much a collection of songs, but more of a thematic whole. From the seething rumble of opening track Consumed, it’s a disorienting and rather terrifying experience. There is some respite in the slightly lighter tones of the closing movement The Drop, which at least suggests that, once acclimatised to existence in the afterlife, some kind of peace is achieved. Yet there’s still a feeling of uncertainty and terror that hangs over the album. Indeed, it is terror that is almost the sole emotion that is triggered as the journey through the depths of the album unfurls.

The feel of the work is established by the overriding sense that Excavation is almost entirely constructed on computer, using little but electronic sounds. The truth is slightly more complex. Krlic took a number of traditional instruments and field sounds and warped them beyond recognition electronically. It’s a neat twist, because rather than start from an entirely fabricated base, time has been spent in dehumanising and morphing the identity of organic sounds to sit alongside synths and electronic glitches. This is an album that seeks to explore a shifting in spiritual planes, and the music reflects this by twisting its source material into something entirely other.

Not only is Krlic is a master of sound manipulation, but his ability to establish mood is quite extraordinary too. The chiming bell (or perhaps gong) at the beginning of Excavation (Part 1) gives way to disembodied voices and a beat that slides like the dragging leg of body mangled in a printing press, reanimated by a monkey’s paw. When those rhythms turn into a heartbeat pulse and a synth hovers above like a distant bomber, a palpable tension is created. Become too immersed in The Haxan Cloak’s world and a series of panic attacks is all too likely.

When the creeping dread of Part 1 gives way to Part 2, seething metallic slices combine with a bass throb that could cause skulls to implode. It takes the almost jolly ambient space of Sabres Of Paradise’s Haunted Dancehall and fills it full of howling demons. Mara ratchets up the tension further with axe blow percussion, searing string interjections that could happily sit in any horror movie (usually around the moment when the babysitter realises the madman is behind the couch), and a drone that is loaded with a sense of utter hopelessness.

As the album draws to a close the tone does lighten a little. The Mirror Reflected Part 2, for instance, allows glints of light to peek through the suffocating bass swells until they begin to fully colour the track completely. When the more gentle tones of closing track The Drop take hold, they’re like an epiphany, a piece of driftwood for the drowning soul, or an oasis for a traveller in a desert. There’s still doubt to be found in the bass tones, which indicates that Krlic doesn’t intend for the song to be an entirely happy ending, but the presence of The Drop marks Excavation as an album that encompasses the meaning behind the phrase “it’s always darkest before the dawn”.

The Haxan Cloak MP3s or CDs

The Haxan Cloak on Spotify