The Heavy – The Glorious Dead 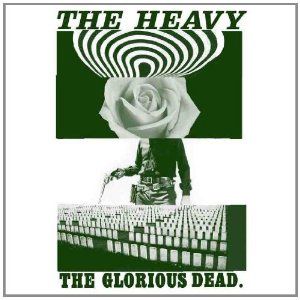 There’s not a great deal to say about the Noid music scene. It has, as yet, failed to set the world alight with a panzer attack of pop bands racing up the charts in the vein of Merseybeat or Madchester. We should probably forgive it though as it is a tiny hamlet on the outskirts of Bath with a population of under three figures. But what Noid lacks in volume, it makes up in quality. That quality is provided by soulful, funk rock four-piece The Heavy.

Treading a retro path in modern pop is a bit of minefield. Get it wrong and you’ll end up more like Bruno Mars than The Last Shadow Puppets. The good news is that, while The Heavy do not wear their influences lightly, they put them together in an entirely pleasing fashion.

The Glorious Dead is a consistently fun record with more tunes to hand than a flu-ridden giant raiding a chemist’s shop. If it weren’t for the sheer copper-bottomed funkiness of the latest The Very Best album, The Heavy would be the party choice of the summer. It’s not a surprise that band have become popular with those soundtracking American TV shows; they’ve mastered the art of making a hook that latches right into your frontal lobe and refuses to let go.

The album opens with Can’t Play Dead and samples from a classic horror movie. It’s a striking move and one that pays off as the huge guitars and gravel-gargling vocals kick off. Telling the tale of a demonic femme fatale, the track is a rousing opener with sinister charm to spare, brave enough to drop out the guitars and strip back to strings and vocals in a really dynamic way.

The tone gets abruptly calmer for the whistle-enabled Curse Me Good with strummed guitars and sweet backing vocals that give the sense of a sunny Sunday morning stroll with a Stax boxset in your headphones. That’s one of the biggest strengths of The Heavy: they have a real understanding of how harmonies made old soul records sing coupled with the ability to drop a Led Zeppelin-style guitar barrage.

What Makes A Good Man and The Big Bad Wolf are the songs where The Heavy live up to their name, grinding out bluesy guitar jams with the vocals laying on top like a delicious layer of whipped cream. The horns on The Big Bad Wolf add another element to the album’s sound, big, bold and entirely justified in a way that a lot of brass in modern pop is not.

Be Mine is an interesting concoction: almost Ska-like rhythms combined with the syrupy strings of a ’60s Phil Spector production, this is the record’s most obvious love song. Same Ol’ takes the record back in a dramatic direction with a huge cello part, squalling guitars and vocals that occasionally stray a little too far into Lenny Kravitz territory.

Another dangerous woman – a bit of a theme in The Heavy’s lyrics – makes her presence known on Just My Luck, which oscillates between xylophone-powered peace and big growling guitar antics. It’s almost custom built for a montage in a big American drama; but that’s absolutely no bad thing.

Conversely, Lonesome Road sounds like a tune created for a Steptoe & Son reboot with a Tom Waits impersonator drafted in on vocals. Horns fart and squawk while the drums shuffle their feet in leaky boots and the organ shrugs. It’s a swerve from the direction and purpose of the rest of the album but it’s also utterly charming.

Don’t Say Nothing is another beautiful boxing bout between intricate vocals and elaborate guitar parts. As with many other songs on the record the sheer joy of the players is evident and you feel it as a listener.

Blood Dirt Love Stop ties up the whole package with a Smokey Robinson take on heartbreak, all jittery piano and backing vocals echoing the bruised lead vocal. No one can ever claim The Heavy weren’t paying attention when they were gorging on Motown hits. Cheekily, there’s even a call back in the lyric to the opening song on the album, Can’t Play Dead.

The Glorious Dead is nothing original. It is the sum of its parts, a collage of a youth spent consuming Motown, Stax, Zeppelin and more. But what makes it quite wonderful is the execution. These songs are not pastiches but rather beautifully constructed homages to some of the greatest pop music of all time with enough modern kick to make them worth coming back to. This is a fun record. Sometimes that really is enough.

The Heavy MP3s or CDs

The Heavy on Spotify