The High and Lonesome – From The Playground 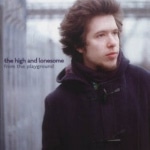 It’s clear just from looking at the cover of the debut album from The High And Lonesome that main man David Blayze sees himself as in the mould of the sensitive singer-songwriter. The duffle-coated, goatee bearded figure looking wistfully out from the sleeve could easily be Bob Dylan, Tim Buckley or any other ’60s contemporary.

Luckily, Blayze’s music has a lot more originality than you may give him credit for. The first single and opening track on the album, ‘Ambulance Chasers’ is a slow burning song, with a gentle acoustic guitar and orchestral strings with intriguing lyrics that manage to hint at something very dark indeed (“Cleanliness is squalor…Isn’t it oppressive”). It’s an odd choice for a single, as it’s not representative of the album as a whole, but it certainly grabs the attention.

Listening to ‘From The Playground’, it’s Blayze’s remarkable voice that you can’t fail to notice. One minute sweeping and hollering on ‘Ambulance Chasers’, the next gentle and reflective on ‘Two Tall Trees’, and even getting away with a sustained period of humming on the excellent, sixties flavoured ‘Genki’, Blayze distinguishes himself as a singer of real originality. The nearest comparison is probably Jeff Buckley, but there are touches of Thom Yorke and even Tom Waits in there as well.

A distinctive voice is no use however, unless you have songs to match, and thankfully Blayze has plenty of these. The aforementioned ‘Two Tall Trees’ is a particular stand out, a lovelorn ballad which manages to sound both regretful and uplifting with that original lyrical twist as well – “and I wish for grey skies to rise over me” and a none too cheerful chorus of “I’m breaking down…I’m falling down”. ‘I Go Low’ is also a real highlight – another quiet sad song about the futility of love and relationships. For a man who dedicates the album to the late, great comedian Bill Hicks, there’s no obvious signs of humour, but it does work perfectly.

If there is a fault with The High And Lonesome, it’s Blazye’s tendency to rely too much on the mid-paced ballad. Only really ‘Breaking Down The Wall’ and ‘Riders On The Line’ raise the tempo somewhat, with the former being distinguished by some excellent Celtic-flavoured fiddle. It would be interesting to see what shape the album would have taken given a bit more variety.

This is a minor quibble though, as ‘From The Playground’ is an excellent debut album from an artist with real potential. Although maybe not all listeners will take to Blayze’s highly distinctive voice, this collection of songs deserves as wide an audience as possible. Certainly a Blayze that’s destined to burn for some time yet.

The High and Lonesome MP3s or CDs

The High and Lonesome on Spotify