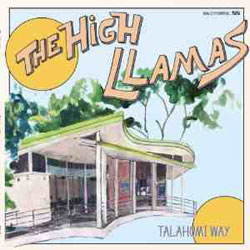 The High Llamas have spent much of the last 18 years releasing consistently engaging albums of mellifluous, harmony-infused music. Recent years have seen frontman and songwriter Sean O’Hagan work at an unhurried pace, carefully crafting songs that seem to inhabit their own particular place, isolated from any modern trends or movements.

Their ninth album Talahomi Way may not contain anything in the way of radical departures, but it sees them consolidate their sound, whilst simultaneously offering a few career highlights along the way. It builds on the disarming beauty of 2007’s Can Cladders, and contains all the traits you would normally associate with the band. The arrangements are intricate, the melodies are deceptively simple and an air of gentle serenity pervades the album. Some of the string arrangements are reminiscent of those supplied by Robert Kirby for the albums of Nick Drake.

Each track demonstrates O’Hagan’s painstaking attention to detail, each particular musical idea being attentively pursued and thoughtfully executed. It is as if each note has been meticulously selected and deliberately positioned, and each accompanying lyric sensitively imparted. The album is mixed by Stereolab‘s Tim Gane, a long time collaborator, and he successfully ensures that none of the precision or clarity of sound of recent releases is lost. Unlike their other recent albums there are no female backing vocals on any of the tracks. The sole inclusion of Sean O’Hagan’s soft-edged vocals lend the album a more personal feel as a result.

The album opens with Berry Adams which sets the mood for what follows, string arrangements embellishing a melody which reveals itself slowly over the four minutes. The pastoral, understated instrumental Wander, Jack Wander establishes the tone furthermore.

Take My Hand is a contender for the strongest track on the album, featuring something approaching a brisk, bossa nova beat. It serves as a reminder of O’Hagan’s interest in different musical styles and sees the band revisit the sun-dappled exotica that has occasionally graced previous albums. Throughout O’Hagan requests listeners to “take my hand, and run it through the sand”. Lyrically it also references the ocean and the sea and it really deserves to soundtrack at least a small part of the forthcoming summer.

The beguiling title track Talahomi Way appears at the midway point of the album, the lyrics being despatched early, allowing the remainder of the track to unfurl itself in patient, instrumental fashion. To The Abbey sounds just as fresh and crisp, with acoustic guitars, strings and marimbas all courteously interacting, discreetly playing off each other.

The cut-and-paste, mildly glitchy electronics of Angel Connector gives an all too brief hint of a different era High Llamas, specifically recalling 1998’s Cold & Bouncy album. Its counterpart Crazy Connector appears towards the end, an example of the short instrumental interludes that The High Llamas do so well. Indeed, several tracks end with the kind of small musical postscripts that the band specialise in. Calling Up, Ringing Down closes the album on an appropriately breezy note.

If a criticism could be levelled at the album it may be that some of the other tracks move along in a relatively quiet, unobtrusive manner, not reaching the heights achieved elsewhere.

It may not be difficult to detect the influences and inspirations that lie behind the sound of The High Llamas but that should not detract from the ambition, zeal or forward-thinking outlook of the music. In Talahomi Way The High Llamas have produced another album far greater than the sum of its component parts. It is unlikely to create any major impact on the current musical landscape but it augments and improves it in its own special little way.

The High Llamas MP3s or CDs

The High Llamas on Spotify