The Hold Steady – Heaven Is Whenever 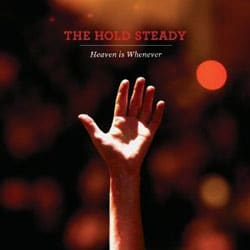 New music isn’t created in a vacuum – it’s patched together from listening experiences. In many ways, the process of making new music resembles a conversation. Musicians listen to what has already been said and then recast it, add to it, or simply parrot it. If every new album that comes out is part of a discussion, then The Hold Steady‘s Craig Finn and Tad Kubler are sitting at a dive bar on a Saturday night having a round with Bruce Springsteen, Jimmy Page and short story writer Raymond Carver.

After four albums, The Hold Steady are still culling the best from American classic rock and delivering it alongside portraits of modern living as seen from a barfly’s perspective. Finn’s half-slurred rambles about lost loves, drugged-up misadventures, and youth being wasted on the young can be heard on any given night in any bar in any part of the world. The thing that sets the band apart, though, is its unfaltering optimism: Finn may be pouring his heart out, but everyone in the bar is rapt, listening to his stories and joining in for the uplifting, anthemic refrains.

Heaven Is Whenever doesn’t really change The Hold Steady’s successful formula. The recent departure of keyboardist Franz Nicolay simply means a return to the band’s earlier sound of prominently featured guitars and songs full of straightforward heavy riffs. Keys still appear on the album – leading the charge on the Springsteen-inspired Our Whole Lives, reverberated to hell on A Slight Discomfort – but they take a lesser role here than they did in the wall of sound efforts on Boys And Girls In America.

Though most of these offerings are essentially carbon copies of older songs (the cowbell-fueled The Smidge pointing back to Charlemagne In Sweatpants, Soft In The Center recalling You Can Make Him Like You), that’s half the fun of The Hold Steady experience. Finn expertly portrays an alcoholic by stumbling over his words, repeating things he already said in older songs, and showing an all-to-eager willingness to identify with others’ situations and to dish out his blunt advice. In the hands of a lesser artist, these elements could quickly become annoying, but Finn has a way of being extremely charming and clever in his genuinely altruistic, self-referential writing and impassioned delivery.

Some tracks on Heaven Is Whenever do depart from the norm. The Weekenders begins with a slow buildup of softly plucked guitars, but it only lasts a minute until it explodes into a burst of guitars. The final song, A Slight Discomfort, transitions from a slow rock groove into an extended, noisy, mock-grandiose outro with strings, taken straight from the Morrissey playbook. But the one track that stands out as most experimental (compared to the others here) is Barely Breathing. It starts with a jerky guitar riff sounding like the Pixies‘ Mr Grieves and progresses into a slow ska/rock feel before it stretches out into a long ending of layered vocals, random horn bleats, and tinny piano.

Let’s face it – even after four records of similar songs, it’s hard not to give in to Finn’s charm. With lines like “You can’t tell people what they want to hear if you also want to tell the truth” (from Soft In The Centre) delivered so earnestly, it’s easy to forgive a repeated chorus that proclaims, “You can’t get every girl – you’ll get the ones you love the best.” It’s easy, too, to overlook Finn’s backing band. Kubler’s crisp guitars join with a versatile rhythm section that can go from soft groove to full-fledged rock at the drop of a hat.

The Hold Steady are able to persevere by growing a little bit on each record. Their loud, rough and tumble early efforts on Almost Killed Me and Separation Sunday have combined nicely here with a sense of southern rock and pop rock from the past few albums to produce another gem for an amazingly consistent band with plenty of room left to grow.