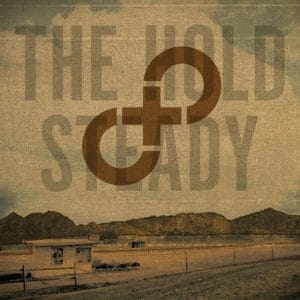 With 2006’s Boys And Girls In America, The Hold Steady finally came to our attention as one of the greatest stateside rock bands. They quickly follow it up by playing yet another musical blinder in the form of this fourth album, and while it may take longer to warm to Stay Positive, there’s no reason why you shouldn’t end up loving these songs as much as the Brooklyn fivesome’s previous offerings.

From the moment Constructive Summer kicks in, it’s clear that it’s pretty much business as usual sonically and lyrically from The Hold Steady this time around – in other words there’s been no real straying from the literate and anthemic formula we have come to expect from them. And that’s a good thing. The fast and frenetic opening track paves the way for an album crammed full of a whole new compelling mix of punch-the-air choruses, glorious upbeat harmonies, growling guitars, squealing solos, warm hammonds and thundering drums, letting up only for the occasional stripped down, beguiling ballad.

But there have been some developments band-wise post-Boys And Girls In America, and it comes mainly in terms of subject matter, as Stay Positive is all about the attempt to grow old gracefully, not to mention the occasional dalliance with various different instruments combined with more complex arrangements to incredible effect; One For The Cutters, for example, features a wonderfully spidery harpsichord, Both Crosses a banjo and Joke About Jamaica the majorly under-used talk box.

Frontman Craig Finn’s word-smithery takes a turn for the better too here, with Magazines boasting the killer refrain “Magazines and daddy issues/I know you’re pretty pissed but I hope you’ll still let me kiss you” and the gravely vocal-spouting singer darkly cooing “Baby let’s transverberate” on Both Crosses – just two short examples which when placed in context prove exactly why Finn is one of the most original and witty lyricists around today.

While it’s extremely difficult to choose favourites from such an impressive collection of tracks, if you only feel like sampling a few songs from Stay Positive make them Sequestered In Memphis and Lord, I’m Discouraged as these easily make for two of The Hold Steady’s finest efforts to date – the former being a buoyant, gritty sing-along tinged with triumphant Dancing Queen pianos and the latter a genuinely moving waltz boasting a gargantuan wailing guitar solo.

If you know what’s good for you, however, you’ll drink the whole album in, because intelligently constructed and musically thrilling records like this are a rare, rare find.