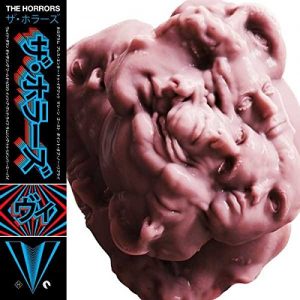 Ten years on from their debut album, it’s still very clear what drives The Horrors. “For us to be excited and motivated it has to be challenging to our ears and be fun to create,” said frontman Faris Badwan in an interview ahead of the release of the band’s fifth album, appropriately titled V. This desire for their music to be “challenging” has always been evident as the five-piece’s sound has evolved over time.

Whether it’s the dark garage punk of Strange House, the shoegaze rock of Primary Colours, the more polished and euphoric Skying or the psychedelic dream pop of 2014‘s Luminous, The Horrors have never been afraid to push their sound to new and interesting places. So it comes as no surprise to find that V continues that trend by matching their anthemic side with a desire to “get nasty” and make something “quite unsettling”.

The first significant change comes in the recruitment of Paul Epworth (Adele, Rihanna, Lorde and Coldplay) on production duties. On the surface it seems like an odd fit, but it pays off in a big way as Epworth tightens up The Horrors’ sound without taking away any of the qualities they have consolidated over the years. Having self-produced their last two records, it quickly becomes clear on V that Epworth provided the shake-up they needed.

Opener Hologram demonstrates how extreme this process of streamlining The Horrors was in some areas. Originally a 25-minute ambient house track, it appears on the album at a much more manageable six minutes and delivers a scuzzy punch that certainly backs up the band’s promise to go “back into the darkness” on V. Badwan brings all the weight we’ve come to expect from his vocal, as he sings: “Are we hologram? Are we vision?”

Further evidence of The Horrors reclaiming the edge that marked out their earlier material comes with first single Machine, which absolutely crackles with intensity thanks to its industrial electronic bite and Badwan’s haunting lyrics (“You will never be more than a machine”). Weighed Down is another stand-out; allowed the breathe with a sparse, scattered beat that gradually transforms into a mighty, but ominous, climax.

It’s not all doom and gloom, though, with Press Enter To Exit shuffling along harmlessly on a dreamy melody before its infectious, bold chorus kicks in. World Below also features a pop-tinged chorus – albeit one that is mostly disguised by the restless guitars that swirl around it with effortless abandon – while Gathering revels in wistful melancholy as Badwan croons: “And there’s someone out there seeing everything and who knows what you know.”

The emotional pull of the lyrics on V certainly feels greater than ever before when compared to The Horrors’ previous output. No more so than on It’s A Good Life, where Badwan is at his most affecting. “The light in her heart is softly dying out again,” he aches, on the song written about the late Peaches Geldof, who he dated back in 2008. His world-weary, tender vocal takes centre stage, with the lean production providing the ideal accompaniment.

Yet as good as everything that goes before it is, the main event on V is undoubtedly closer, Something To Remember Me By. The comparisons with New Order are understandable due to its bittersweet, pulsating synths, but to just write it off as a homage would downgrade what is quite probably the best thing The Horrors have ever done. It’s a fittingly meteoric finale to an album that is nothing short of a triumph, one that perfectly balances their craving to be “unsettling” again with soaring, arena-ready anthems.