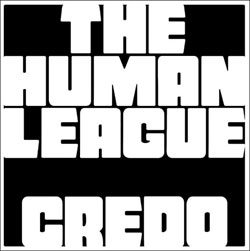 The Human League’s return after a decade, Credo, is a lot of fun, marred only by occasionally bad lyrics. It feels like a defiance of time. Firstly because the band have actively played festivals wherever the bill has worked, so Electric Dreams and Don’t You Want Me Baby get a least an annual airing for the more active festival goer.

Secondly, and more pertinently, as the whimsy of opener and lead single Never Let Me Go introduces itself with camp electro-disco there’s the impact of Dare and the revolutionary remix album Love And Dancing, it still sounds completely fresh and absolutely The Human League. So either, A) The Human League pushed the boundaries and sat ahead of their time by three decades or B) – and unfortunately the more likely answer – commercial music production has gone nowhere since the ’80s.

To be completely fair it should be noted that pop music has chosen to return to this sound for many very good reasons, for Credo successfully blends lullabies and a street toughness not heard since their former, industrial noise line-up. Once over the initial shock of Night People’s “Gather up your skirts and trouser/Put on your best frocks and blouses” and “Time to go out form your houses/Must we creep round like the mouses?” couplets Night People is an enjoyably intense dance tune. Admittedly there is a certain charm to lyrics that have the eloquence of a primary school ‘what I did in my summer holiday’ presentation but anyway.

Into The Night stands out as a strong Motown meets Orange Juice meets, well, The Human League track. Starting with a groove even Love And Dancing mastermind Martin Rushent (similarly Dare’s producer) would tolerate, this blends beats into a clunking love song that ascends and resolves itself with grace. As Fairlights, Omni-Qords and a world of seemingly analogue synthersizers seem to dance with abandon, they answer Oakey’s question “Do you turn left, or do you turn right?/Back into bed, or into the night?” Credo is evidently written to soundtrack the mysteries of lost, long evenings.

As well shading the romance of nights out, it spotlights the pitfalls. Egomania marches to staggered, sharp vocal lines that escalate into a world where confidence gets swallowed (“Dazzling like a diamond in the Sun/Egomania”) and clarity gets lost. It’s a quandary well illustrated by strict tempo and rhythmic aggression, even with some Autechre-esque idly bits to melt the end of the song.

Credo is a welcone return for The Human League, and there’s a sense of satisfaction in having them release new material that’s song focused. A band has never documented the very cocktail of emotions stirred by love and dancing as well as The Human League have and, as Single Minded states, “Maybe I’m wrong but I’m bound to stay/Single minded, night and day/Give me a kiss and walk away.” It surmises the public’s relationship with this band, who’ve patiently waited for their audience to inevitably return. As the disco beats of Electric Shock kick, they plant another surprise. Beguiling.

The Human League MP3s or CDs

The Human League on Spotify