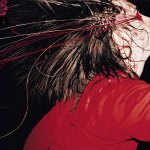 LA’s answer to The Hives, the less complex At The Drive-In, or maybe even the Primal Scream that could have been, return under a barrage of hype as “the saviours of underground rock”. This translates as making rough, murky guitar strangulations with all warts and potty mouths present and incorrect. The ties are gone. The songs remain the same.

Billing their music as being for “losers, drug addicts, high school dropouts, freaks, and f**k ups…” they set out their none more black stall from the off. Smacked out, sprawling rage oozes from every inch of their sweaty leather kecks. This is serious music for people serious about their moods. In places it sounds like Black Flag, Jesus Lizard, The Birthday Party, Spacemen 3 and The Stooges in the nihilistic worldview of misunderstood youth and druggy cock-rocking manhood.

With all spite and teen discontent scowling along in a fug of angry guitars teetering on the brink of collapse, the pace and approach rarely lets up. As with At The Drive-In’s penchant for time and style changes in the same song, this all makes for a bewildering experience. When it does veer away from the guitar retreads, it’s to good effect/relief, for the electro slash up Meatmaker is pure Suicide.

High points of The Icarus Line’s primitive blues howl are few, but when they do latch onto a tune it’s a guarantee they’ll throttle the life out of it, especially on the preening Jagger-sleaze of Party The Baby Off (inexplicably tacked on the end of the album as an afterthought) featuring the great stoner-line – “Where did the cat go?” On The Lash goes for vertical takeoff in the middle of a blues stomp and Meatmake offers some variation.

The real let-down of The Icarus Line comes in the form of Joey Cardomone’s reedy whining vocals struggling through the sonic soup. A case in point is Getting Bright At Night’s interminable nine minutes of guitar w**k coupled with the whinging repeated line “never give up on me baby”. Lyrics, when you can make them out through the “wasted” delivery and the potage floating around them, offer little in the way of inspiration. To be honest, in the end you don’t really care, as you’ve probably heard it all said before and said better. All the “attitood” is there by the bucket, but nothing can disguise the sound of a flaccid Iggy-dick being slapped against a hollow bucket.

The Icarus Line continue the trend of “old heads on young shoulders” as seen in Kings of Leon, The White Stripes and The Strokes – bands that seem beamed intact from the past with razor sharp record collections and a keen magpie’s eye.

The Icarus Line starry-eyed worship of their heroes is disconcerting, when all too often this album’s reference points don’t inspire in their own right, but instead make you run to the originals to remind yourself what you were missing. Guitars on grunge throughout a relentlessly one-dimensional Stooge-out and charisma-free hero worship does not good tuneage make.

Some albums have to be listened to in the appropriate mood, the appropriate environment and doing what the music inspires. This album demands you wear leathers and shades, have a fag drooping from lips, the floor littered with scuzz-rock album sleeves, tossing your wild mane of hair akimbo and relentlessly beating your (or a friends’) flaccid cock on a guitar set to “Stooge”. As old uncle Iggy Pop once said, No Fun.