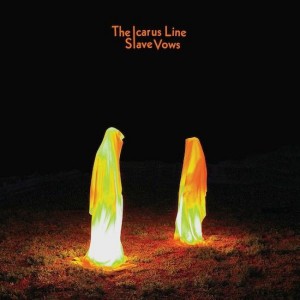 In an age when most albums are slaved over, tweaked, polished, cut into a million pieces and reassembled into an unrecognisable shape, and generally treated like the culmination of a century’s work rather than simply a collection of songs, there’s something almost romantic in the simple idea of pointing a microphone at the band and – George Martin style – shouting “play!”.

For that is how The Icarus Line have made Slave Vows. Well, alright, they probably pointed about 15 microphones at the snare drum alone. But for the most part, it was simply the band, in a room together, playing their hearts out. As a result, the album stands not so much as a coherent, carefully-planned sequence of songs, but as a long-form commercial for their live show.

And a highly effective advert it is too. Opener Dark Circles begins with an eternity of feedback, giving you time to wait your turn at the urinal (and wait for the wide-stanced talkative man next to you to finish up so you can finally force it out), zip up, wash your hands, and pop back into the auditorium to find someone shorter than you to stand behind. And even when it gets going, it’s something of a slow burner, with a looped, hypnotic bass riff giving way to a slow jam in the Doors vein.

The Icarus Line know how to pace themselves. In fact, they only really kick after a hundred seconds of quiet thuds and wobbly guitars into second track Don’t Let Me Save Your Soul (and after that 11-minute opening track). But as Hitchcock said, if a bomb under a table explodes, that’s surprise. But if it doesn’t, that’s suspense. The Icarus Line could make a mighty fine thriller if they put their minds to it – for when they do explode, it’s really something to behold, the band rocking out like a scuzzier Bad Seeds as Joe Cardamone hollers and yelps over like Brian Johnson and Mick Jagger had hideous babies together one hot ’80s summer.

Like a live show, it’s loud, too. Loud in that way you can turn the volume down but the squalls and screeches of guitar still manage to sustain serious pressure on the eardrums. The soloing on Marathon Man – rather appropriately – pierces like a dentist’s drill, Rats Ass builds to a Munch scream of a climax, and the band sound uncompressed and unshackled throughout.

There are times when it doesn’t quite hang together, when any sense of a unique, contemporary identity is crushed beneath the cuban heels of a hundred rock legends, from the Stooges and the Stones to Primal Scream and Nick Cave. Not a great deal of effort has been put into actual songwriting, either – the only truly memorable melody comes with City Job, as Cardamone, channelling Michael Douglas in Falling Down for all he’s worth, builds a succession of hooks into a final yell of “I’m coming home!”.

But it hardly matters. There’s too much spirit in this cocktail for the mixer to spoil it. And in Dead Body, there lies a riff of such gargantuan greatness that it not only encapsulates what’s great about this album, but what’s great about rock music full stop. Proper rock music, too. Buy it for that alone – and see you down the front.