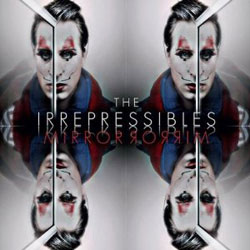 Mirror Mirror on the wall, an ordinary album this isn’t at all. Given the critical success of Wild Beasts‘ second album Two Dancers last year, The Irrepressibles‘ debut Mirror Mirror should find a ready audience. Front man and composer Jamie McDermott’s operatic wail, reminiscent of the falsetto voice of the Kendal foursome’s Hayden Thorpe, leads a 10-piece performance orchestra whose music will thrill hardcore Antony And The Johnsons aficionados and fans of both Patrick Wolf and Kiki & Herb.

Startlingly, it seems The Irrepressibles have, in some form, been going for seven years already; much of this album’s material first saw the light of day in a variety of EPs, singles and films. In common with fellow multi-instrumentalist slow burners Revere, who also finally get around to releasing their debut album in 2010 after many years of tours and EPs, it’s clear that McDermott and friends have spent time wisely, honing their art to take in requisite factors of glamour, shades of light and dark and whole lifetimes of hard-won experience.

Mirror Mirror is, first and foremost, art; yet it’s art that wears a playfully flamboyant carnevale mask while inviting round likeminded company. Calling to mind Weimar cabaret one moment and the outlandish baroque phantasmagorica that inspired it the next, at no point is this a work demanding to be heard on drivetime radio. Rather it transports the listener to somewhere other. Sounding as though it’s performed amid scenes of stockings, make-up and delectable boys with secrets to keep, this theatrical pomp offers at least a surprise a minute.

Lush orchestration aside, McDermott’s confessional lyrics encompass both the exotic and the impenetrable, straddling melancholia with poise. Splish! Splash! Sploo! marks the high tide mark of drama, while Knife Song’s lyrics suggest McDermott’s talking to himself in the mirror and offering us a chance to eavesdrop on an internal dialogue. All of it is delivered in his extraordinary Antony-like trill that owes at least some of its DNA – and conspicuous, self-referential and unabashed vanity – to David Bowie; it’s a trained instrument with the power to move, to storytell and to captivate.

By the end of closer In This Shirt you’ll want to do one of two things. The first is to dress to the nines and totter off to see The Irrepressibles play on Valentine’s Night at London’s Queen Elizabeth Hall. The second would be to submit to immersing yourself in Mirror Mirror all over again. And again.