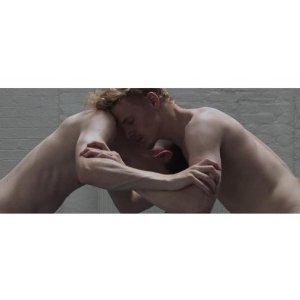 “Take off your clothes, I want to see you naked”: these are the first words we hear Jamie McDermott’s deep baritone coo on The Irrepressibles‘ second album. But the feeling is not an overtly sexual one; instead it feels much more like a plea for honesty. The second offering from this orchestrally informed art-pop collective led by the towering presence of singer/composer/artist McDermott is concerned with the search for an exalting love in the face of struggle, self-doubt and self-loathing.

The image of two men that adorns the cover, in a half embrace, half struggle, is the perfect encapsulation of these lyrical themes, and the sonic landscape in which this struggle is staged is one of great drama and operatic intensity, played out by an army of grand pianos, choral voices and strings as well as moments of dark european electronica, all deployed and arranged with great tactical prowess.

Honesty is a term often used to describe music which is stripped back, bare, often with straightforward and confessional lyrics, as if any added musical layers or lyrical ambiguity acts as a barrier between the artist and his emotions and the listener. But for The Irrepressibles, who at their genesis began with a manifesto to “make something that portrays the real originality, drama and intensity of life”, the melodramatic nature of their music is at odds with the negative connotations of that word – the implied exaggeration in its definition – because the honesty of their music is born out of their belief that life is melodramatic, so they create music that encapsulates this melodrama.

After the discordant yet beautiful orchestral aperitif of Time Passes, the album truly begins with Pale Sweet Healing. A reverb drenched falling guitar line and heartbeat drum pattern the backdrop to McDermott’s tale of an intensely personal moment of connection between two lost souls – the aforementioned wish for nakedness both a physical and mental disrobing in a place of sanctuary, a place where both have “come here to heal, because we want to be free, we want to be”.

This theme of escaping persecution and the search for honesty and truth with another is seen most powerfully on lead single Arrow. McDermott reimagines his subject as Saint Sebastian, a young Christian saint and martyr who was killed during Roman persecution of Christians, depicted in art tied up and shot through with arrows. The flowing piano and panning violin lines ebb and flow as McDermott’s vocal intensity rises, singing to his Saint Sebastian telling him to disregard his “sin” because “in every breath we complete, the meaning of our truth” – that solace can be found in love, free from the threat of persecution.

Elsewhere, New World introduces a slice of dark electronica to the record’s musical palate without ever sounding at odds with the orchestral and choral-voiced grounding of the song. The Opening strips everything back to a simple finger-picked acoustic guitar, leaving McDermott’s voice as naked as it is seen on the record, with only some Elliott Smith-esque harmonies as back-up, and the result is quite lovely, and a welcome respite from the dark surroundings of the rest of the album.

Nude is not easy listening, yet the lyrical and sonic intensity of the record is given balance by McDermott’s persona – his beautiful deep voice a reassuring and comforting presence in the eye of musical storm that his band conjures. On Tears (Prelude), he darkly croons the line “I love the truth you hide”, and within this lies the essence of Nude – it’s a dark and intensely personal expression on finding and accepting personal truth, often only with help of another.