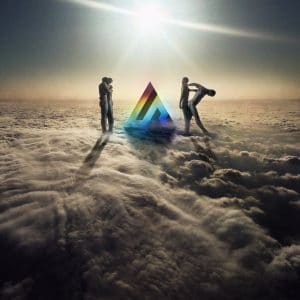 First things first. Superheroes is an album that needs a bibliography. So here it is. One: East London circa 2003, dressed in hot-pants with ivy hot glued to your tits, bumping K in stairwells of Bar Music Hall. Two: The entire history of Berlin and its relationship to queer electro, and a flypast stop in Berghain (A tip: wear black, don’t look at your phone in the queue, don’t smile). Three (and maybe the most obvious): The context and music of David Bowie’s Low, and the truth universally acknowledged that all great geniuses must (at some point in their complicated career) run the fuck off to Berlin and make an electro album. Four: Kashpoint. Club kid electronica; go look it up. Five: The history of The Irrepressibles, their routes firmly anchored in the new-glam-dandy resurgence of those early 2000’s, their Antony And The Johnsons-esque past, and their pizzazz for blending the orchestral and the electronic into a synthesis that’s entirely unique.

Alas, it seems the old band are no more, Jamie McDermott having cut ties with his beloved London and bounced across to Berlin. The result is this wildly contrasting and out-of-character electronic album that leans more on his vocal contributions to Rex The Dog’s Do You Feel What I Feel and Röyksopp’s Something In My Heart than The Irrepressibles’ glittery past. The former nine-piece is now down to just McDermott himself, the only thing indie that’s left of the former indie band on Superheroes is that, beguilingly, the spoken-word piece on the album seems to be mixed about 30 decibels quieter than the rest of the record.

But even with this, Superheroes isn’t bad. We open with pulsing electronic beats, a chattering anxious sound, a mood that lends its name to title track Anxiety, encompassing perfectly the feeling of moving countries, of careful new discoveries. Internationale calls on artists such as Ladytron and Miss Kittin and a cornucopia of languages and cultures to create a love letter to Berlin, Europe’s true heart. Let Go is a queer love story, with fluttery high synthesiser notes echoing fluttering butterflies in your chest. Dominance is filthy and raw, summoning the dance floor of sex clubs with a guttural howl of “I’ve got some Kinky shit, I’d like to do with you”.

And here’s where we fall down. Swans and The Child Inside switches the pace of the album back down to tranquil and robs us of our expected musical high. There’s promise in The Abandonment Of… EGO!, which threatens momentarily to pick the opening pace of the album back up, yet Submission again knocks us down before our climax, into the beautiful poem The Distance Of Time Between Us. We close out at this glacial momentum with The Most Beautiful Boy (Strong Outside A Man, But Inside A Boy), a track that would have sounded way better and hit with much more impact if it was placed before the poem.

The truth here is, further towards the end of the record we find our attention waning, and rather than being drawn through the record, it becomes a lesson in electronic and immersive concentration. Instead of swimming in a sea of orchestral beauty, overcome by heavenly lyrics, we’re drowning in abrasive synths, which, if broken up with a few of the tag-specified ‘indie’ songs, would have brought us back to shore. Without the variety, however, we’re lost at sea, trying to catch the attention of the boat – and we never quite get there.