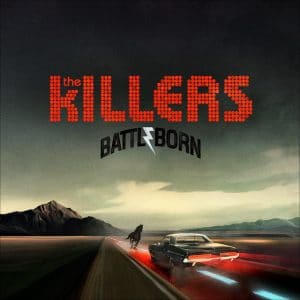 For those dogged detectives among us who’ve been following the killing since the beginning, the fact that Brandon Flowers and company actually hail from the deserts of Nevada is a never-ending source of surprise. All The Killers had to do was release their debut album, apparently with the sole purpose of showing Shed Seven what they could have been, and they’ve remained fixed in British indie hearts ever since as one of ours.

The retreat across the Atlantic was first signalled on Sam’s Town, but with Battle Born – named after the words sewn into the flag of Nevada – The Killers have set out on a full-throated, chest-beating quest to steal the heartland and reclaim Americana. But for a lack of inspiration and a surfeit of cliche, they might so nearly have made it.

A few British influences remain, but not any recognisable from the Hot Fuss era. The guitars in opener Flesh And Bone owes a debt to The Police, and Dire Straits – in particular the previously covered Romeo & Juliet – can be heard in several songs. But the Anglophilia ends there. Runaways, the first single and easily the best track here, features Brandon Flowers channeling Billy Joel with all his might, though for once they get away with it when the chorus comes, and there’s some real passion and conviction in its delivery. But elsewhere, The Way It Was is little more than a power ballad in the Foreigner mould, and A Matter Of Time (“it was the night, it was the moon”) is so like Meat Loaf you can just about hear the lacey cuffs growing out of Flowers’ sleeves.

Preposterous excess aside, this nuclear bombast is at least entertaining. The Rising Tide is grand but bland – it does all the right things at the right time, but never quite finds the tune it needs to lift the spirits, soaring like a Walmart carrier bag on an updraft. Here With Me features the same piano figure that has begun every unimaginative ballad since Imagine, and Be Still – vocal acrobatics notwithstanding – is simply dull.

But what brings this album down most is its small-c conservatism. Their recent acceptance of Mitt Romney’s praise might not be indicative of political support, but is certainly symptomatic of an unwillingness to offend an audience that yearns for supposedly better times. “She wrote her number down and gave it to me” on Heart Of A Girl – incidentally one of the album’s better tracks, with an honest piano refrain replacing the usual aimless synth burbles – is just one of the lyrical anachronisms offered up. When a cellphone is mentioned in Here With Me, it’s almost jarring, like Miss Marple requesting a DNA analysis.

From Here On Out marks the nadir of the album, up-tempo country rock that takes past into pastiche – the irony being that it’s the only song that in any way addresses the future. The more overriding irony is that whilst The Killers head into their plush studio singing of motels, Daddy’s cars, and innocence, Bruce Springsteen – the Godfather of the genre being plundered – is using his latest album to rail against present-day Wall Street and Washington villains.