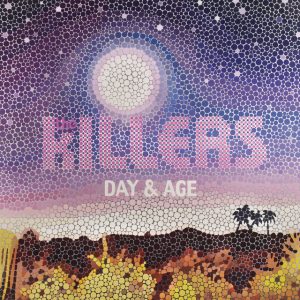 Brandon Flowers and his mates in The Killers have always split critical opinion since they first burst onto the music scene in 2004 with the thrilling Mr Brightside. Their debut album Hot Fuss was a mixture of terrific highlights and some decidedly ordinary tracks, while they went all Bruce Springsteen on our arses on the patchy follow-up Sam’s Town.

Whatever the artistic merits of their albums The Killers have never had trouble shifting major league units, and have long since transcended their indie roots in reaching a stadium rock level of success. The burning question is, have they refound the mojo that gave us songs as greats as Mr Brightside, Somebody Told Me and When You Were Young?

Day & Age sees the band teaming up with UK producer Stuart Price aka Les Rhythmes Digitales, a canny operator who is now on quick dial for some of the world’s leading artists. This is not the first time Price and The Killers have worked together – they teamed up on the Christmas single Don’t Shoot Me Santa and several tracks from the odds and sods collection Sawdust.

Price’s steadying influence is apparent from the outset, with Day & Age leading off with the triple whammy of Losing Touch, Human and Spaceman. The band locks into an irresistible glam-rock groove on Losing Touch, with honking saxophones and Flowers’ strained mock falsetto nailing down as neat a David Bowie pastiche as you will hear this year. Both Human and Spaceman hit the pulsing synth-pop mother lode that first propelled the band into the stratosphere back in 2004. Neither would have sounded out of place on Hot Fuss.

Quite what the late Hunter S Thompson would have thought of Flowers’ appropriation of one of his comments for the line “Are we human? Or are we dancer?” is anyone’s guess. That this is one of the more straightforward lyrics on the album speaks volumes for Flowers’ propensity to spout utter gibberish. Rarely can such a major rock band have said so little while trying so very hard.

The album shifts gears on the next few tracks, but unfortunately in the wrong direction. Instead of kicking off into overdrive, the band goes all ’80s white funk on Joy Ride, conjuring up lurid images of George Michael and Simon Le Bon rather than Joe Strummer. Meanwhile, I Can’t Stay features steel pans, harps and saxophones over a cha-cha beat, something this reviewer wishes to never hear again. Stuck between these two tracks, This Is Your Life swaggers along on a beat lifted straight from Talking Heads‘ Road To Nowhere, while A Dustland Fairytale attempts to recreate the bombastic rock of the best of Sam’s Town but ends up sounding more like a B-side.

The mid-tempo Neon Tiger picks up the intensity after the mid-section lull, with Flowers making good use of the sparse instrumentation to provide one of the album’s best vocals. The World We Live In might well be the most mainstream friendly track The Killers have yet made, but it is strangely endearing and leads naturally into the seven-minute Goodnight, Travel Well. The album’s big statement (and closing track on the non-digital edition) highlights everything that is wrong with The Killers. We don’t want to hear Flowers over-emoting to the nth degree (and no, I haven’t got a clue what he is on about) and The Killers going all doom rock. We want snappy songs with killer choruses where the lyrics are not as important as the urge to get up and dance.

Day & Age will naturally sell by the bucket load, especially in the UK, which seems to have taken the band to heart. In this day and age, though, people would be better off cherry picking the best tracks for download.