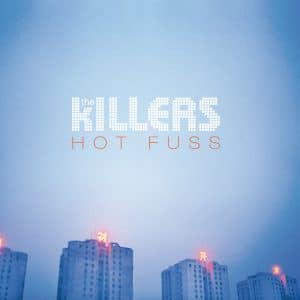 That The Killers hail from Las Vegas is a surprise when you hear their debut album. Hot Stuff throbs and aches with bouts of Britishness. The symptoms? Well there’s the fake British accent of frontman Brandon Flowers, the clear angular Britpop of Pulp and, overarchingly, the industrial synths of British new wave electronica.

So these guys haven’t come up with anything strikingly new here, but they have come up with an elegant, impassioned album full of hooky riffs and sharp songs. The album is dark, like a film noir, with tales of nocturnal dancing and midnight shows sung atop lashings of black echoey synths and shadowy guitar fuzz. Flowers’ vocals are frequently distorted to sound like he’s either singing down a phone or shouting through a tannoy.

Jenny Was A Friend of Mine is a strong opening song. Flowers’ melodramatic high vocals ascends over a funky bass riff and an epic synth, singing scene-setting lyrics such as, “We had a fight in the promenade out in the rain,” about a crime de passionelle.

Current single Mr Brightside comes next, a high octane and lyrically-frenzied song about gut-churning jealousy. It’s already a hit over here, debuting at number 10 in the UK singles charts.

Then, disappointingly, it’s more of the same with Smile Like You Mean It and gender-bending single Somebody Told Me with a chorus of, “Somebody told me you had a boyfriend that looked a girlfriend that I had in February.”

At this point the unvarying synth and guitar combo could do with a shake-up, and thankfully we get just that in the next track. The stunning Glamorous Indie Rock & Roll gets rid of the synth and replaces it with sexy rock ‘n’ roll riffs in a raw pledge to dedicate life to hedonistic music-making.

One of the more remarkable tracks is All These Things That I’ve Done, an epic multi-tempo song in which Flowers sings the incantatory lyrics, “I got soul but I’m not a soldier,” accompanied by superb gospel choir The Sweet Inspirations. The choir briefly returns for the slow and seedy Andy, You’re A Star, that deploys angular riffs and features the bellowing plea, “Promise me she’s not your world,” making for an adulatory, faintly homo-erotic homage.

Final track Everything Will Be Alright is another nocturnal slow-burner that was recorded in guitarist Dave Keuning’s bedroom and was produced by Flowers. The muted vocals sing over simple keyboard chords and a slow drum-machine. It’s a dreamy, hazy song that stands in stark contrast to the pumped-up opening track, almost as if the album has stayed up all night and is now fast fading into slumber.

Fundamentally, Hot Stuff is a darkly beautiful debut album that, alongside well-crafted songs and evocative lyrics, is packed full of achingly cool attitude. The Killers have been hyped to the rafters of late, but I have to say that for once the hype is entirely justified.