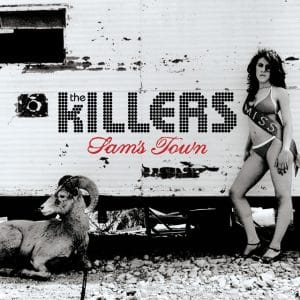 So what do you do if you’re an American band, steeped in Anglophilia, whose first album was taken to the British public’s collective heart but remain, in essence, a cult band in their homeland?

The answer, if you’re The Killers, is to dump the metrosexuality, eyeliner and songs with a barely disguised homo-erotic subtext and go all huge and epic to appeal to America’s heartland. For, like Razorlight and Snow Patrol this year, Brandon Flowers and friends have wholeheartedly embraced the stadium rock sound.

Of course, there always has been a grandiose element to The Killers’ music – indeed, All These Things That I’ve Done and Mr Brightside are some of the finest anthems you’ll hear anyhere – but they really go for it here. Flowers’ much discussed love of Bruce Springsteen is much in evidence, almost to the point of self-parody at times.

The problem is that, while Springsteen is an undeniably great songwriter, anyone who tries to copy him comes across as a bad impressionist. And that’s what happens far too many times on Sam’s Town – there are lyrics about speeding down highways and dreaming of getting out of a small town. At one point, you could swear that a girl called Mary is mentioned in This River Is Wild (it’s actually ‘merry’).

There are some great songs hiding beneath the rather over-produced sound (courtesy of Flood and Alan Moulder) though. The title track makes for a perfect opener, its big synth motif driving the melody along perfectly. When You Were Young, despite sounding as flat as a pancake on its single release, makes more sense here, Flowers’ impassioned vocals sounding particularly good.

Yet elsewhere, it’s a whole different story. The rather odd Enterlude and Exitude, which bookend the album, are the only respite from the overblown and sometimes pompous sound which dominates the album. It’s a sad fact too that Flowers’ songwriting touch appears to have deserted him – whereas nearly every track on Hot Fuss sounded like it could be a single, there’s no such commercial savvy here.

Bling (Confessions Of A King), once you get past the appalling title, sounds big and important, but there’s no strong hook at all, leaving the song somewhat floundering. For Reasons Unknown disappoints as well, Flowers’ voice straining uncomfortably on the chorus.

Flowers’ lyrics have become irritatingly cliched as well. Perhaps the worst offender here is This River Is Wild, full of mention of watching the world turn and running for the hills. It also includes the couplet “Adam’s taking bombs and he’s stuck on his mom because that bitch keeps trying to make him pray” which could possibly be a contender for most unintentionally funny line of the year.

Uncle Jonny, despite a nicely edgy sound, falls apart from the first line of “when everybody else refrained, my uncle Jonny did cocaine” and never recovers, while Why Do I Keep Counting just sounds anonymous and dull, with Flowers again sounding almost in pain at times when straining to reach the high notes.

There are some bright spots though. Bones, the touted next single, reins in the bombast for a typically Flowers tale of anxious sex (“Don’t you wanna come with me/Don’t you wanna feel my bones on your bones?”) with the welcome addition of a brass section giving the song a light and playful feel. My List too is dark and atmospheric, although this also succumbs to bombast by the end.

There’s no doubt that Sam’s Town will be one the biggest releases of the year, but it fails miserably to live up to Flowers’ boast that it will be “one of the greatest albums of the last 20 years”. With too much empty bluster and not enough decent songs, Sam’s Town can only be regarded as a step back for The Killers.