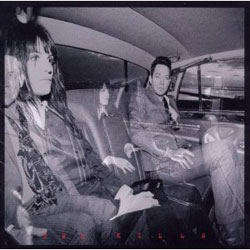 It has become the thing to talk about The Kills in terms of a series of external factors. Factors which have the square root of bugger all to do with anything they’ve done as a twosome. Hell, we’ve all done it. It is vaguely inescapable – like when you do the pedestrian avoidance dance with a punter approaching from the opposite direction. You go left. They go left. You go right. They go right. You go right again. They’ve had the same idea. KABOOM.

In the face of the ever rising pile of tabloid speculation, The Kills have remained remarkably mute. Which is smart, because there really is no point in attempting to rise to it. It just isn’t possible to engage tabloid speculation in some sort of verbal joust, beat it into submission with a quick wit and a rapier tongue before slapping it across the face with the metaphorical glove of your victory. Because, frankly, tabloid speculation will always resort to attempting to take a picture of your undercrackers as you’re getting out of a car.

No, the only possible thing to do is let actions speak for themselves. And that’s the thing about actions: done well, they don’t half speak loudly. Blood Pressures screams. It’s a fantastic record. A clanking, bluesy, sleazy, sexy thing. It could be clich�d, but it isn’t. It could just be a retread of former glories, but it isn’t.

It is, however, possibly the best collection of songs they’ve yet put together. Satellite welds guitar squalls to a skanking rhythm and a gospel choir to outstanding effect. Future Starts Slow has a riff metallic enough to shoe a horse with and Damned If She Do is as glammy and as filthy as Mud covered in, well, mud.

It could be argued that it’s made of the same basic constituent parts that have gone towards the construction of the other Kills records, but frankly, given the limited number of constituent parts, that would be rather little churlish, particularly when what truly matters is that they don’t seem to have exhausted the possibilities of how they can arrange them to create something fantastic.

Of all that could have been expected to happen to The Kills post the shining of an ever brighter spotlight of public awareness, the production of the most complete record of their career is an unexpected one. But, in no uncertain terms, that’s what Blood Pressures is. It’s an album that deserves the limelight, regardless of how it got there.

The Kills MP3s or CDs

The Kills on Spotify