The Knife – Tomorrow, In A Year 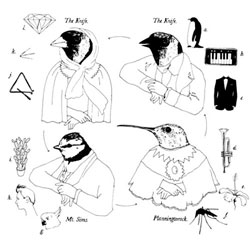 When it was announced that The Knife had been commissioned to produce an opera – and an electro-opera at that – about the life and work of Charles Darwin, expectations were naturally high. This is the same pair of siblings responsible for 2006’s stunning Silent Shout; in 2009, one of them, Karin Dreijer Andersson, became that green lasered creature of the dawn Fever Ray. Even so, the concept of an opera channelled through such caustic eclecticism seemed almost ungainly in its possibilities.

Fittingly, Tomorrow, In A Year may be one of the absolute most challenging pieces of music ever created. On first listen, the album’s first half – thick as it is with clicking and hissing and chirping – is barely recognisable as anything more than dissonant ambience (indeed, Variation Of Birds features nearly three minutes of manipulated electronic feedback), a soundscape from a dystopian world where science and melody have become irrevocably and horrifically intertwined.

This is an album whose release has been awaited with equal parts anxious nervousness and handy dismissal. But, given the limited scope of the handful of stage perfomances, it’s apparent that Tomorrow, In A Year was never conceived as a vehicle for mainstream acceptance. Retrofitted for record by Karin and brother Olof together with their collaborators Mt Sims and Planningtorock, it’s the nearest thing we’ve got to the live operatic experience which, based on the grand scale of its digital equivalent, must have been something sublime to behold; sadly, we’ve yet to behold it.

And while the album surely suffers a bit for lack of visuals and connective tissue, the narrative bits – whatever they may be – are only missed in a cursory way. The music does not come easily to the listener; The Knife have foregone the business of handing out easy answers. The narrative is sparser still, with lyrics bouncing from Darwin’s field journals to lithe sketches of his inner life. Even so, the opera as a whole rewards the active listener – one who’s willing to invest some time in it – exponentially.

The vocals – which are sparse and barely recognisable as English throughout the album’s first half – are provided by mezzo soprano Kristina Wahlin, along with Johnathan Johansson and L�rke Winther, and each fills his or her role beautifully. Wahlin especially conveys her vocal presence with booming, vibrato-thick power, often conveying heart-wrenching emotion with her soaring highs and doldrum lows. All of this, though, is in stark contrast with the electronic disjointedness of the musical backdrop.

The juxtaposition is an interesting one. Animal sounds permeate the soundfield. Here, the chirping of crickets; there, the mating calls of primates. The natural world seems at odds with the beeps and bloops of The Knife’s electronic sensibilities. And where the album starts off blearily simple and disconnected – a primordial soup if ever there was one – it gradually takes shape over the course of its natural selection, and by the end, the listener is taken in by the shattering scope of its resounding and genuine musical genius.

Divided as it is into two discs, Tomorrow, In A Year becomes markedly easier to digest in its second half. Most notably, the lead release Colouring Of Pigeons serves as the link between chaotic disorganisation and musical homeostasis. Its tumultuous drums and staccato vocal mirroring present one of the first easily discernable hooks on the album (though plenty precede it, if only covertly) and, even in its 11-minute scope, it still comes across as a well-packaged and unindulgent pop song. It marks Karin’s first vocal appearance on the album and, as such, it offers a welcome – if fleeting – glimpse of the Fever Ray her recently found fans may have been hoping for.

Seeds presents a more concise electro-pop beat and builds gradually into an almost danceable tune with clinking synths and hushed vocals. The title track is a loping and tumultuous return to the operatic form, even with all its percussion (which must have been devastating in the big-hall reverberations of the stage performance), and it presents a lush and welcome section of warm vocal harmonies after so much cold sterility. The Height Of Summer closes the album with big polyrhythms and the haunting final question: “How is Charles? I haven’t heard from him for a long, long time. A thousand years seem to pass so quickly.”

Tomorrow, In A Year will leave multitudes scratching their heads. Some will dismiss it outright as the pompous posturing of an avant-garde group who got too experimental for their own good. But, to the committed listener, the apparent cacophony gives way, slowly peeling back from itself, to reveal a supremely intriguing and complex musical vision. Either way, Tomorrow, In A Year provides a complex view of The Knife as unmatched in their daring, their music quite defying categorisation as one species or another.