The Lathums – How Beautiful Life Can Be 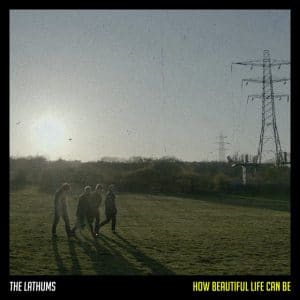 Led by singer-songwriter Alex Moore – a newbie to music of any kind in recent years only – Wigan’s The Lathums have created somewhat of a storm, initially locally but now with their debut album, nationally too. How Beautiful Life Can Be is the culmination of a meteoric rise for the quartet that’s seen them championed by Tim Burgess of The Charlatans, and with James Skelly of The Coral partly producing, they’ve got some big indie icons behind them.

A load of similar indie guitar bands have gone before them, of course, so why would The Lathums be any different? On initial impressions there seems to be little that sets them apart; however, the combination of Moore’s knack for knocking out a catchy melody, his own compelling (if not mind-blowing) vocals plus a guitarist, Scott Concepcion, who clearly takes inspiration from rock legend Johnny Marr with some impressive jangles, is a concoction that works incredibly well.

The boys speak of putting this little Northern town of Wigan on the music map, but of course The Verve have already done so a couple of decades or so ago. Yet their ‘boys next door’ appearance and honest outlook on life (in a kind of The View way) finds the band offering up some attractive qualities that help them stand out from the pack.

Half of the album’s 12 tracks are under three minutes, leaving no time to get bored, and there’s little to dislike. In fact when opener Circles Of Faith kicks things off, you wonder whether they’ve played an ace too soon: it’s catchy, the jangly guitaring stands up there with much bigger bands, and Moore’s rousing vocal delivery – particularly during a bridge – is instantly endearing. Fortunately it’s not a one-off, although the number of occasions in which similar levels are reached is expectedly fewer than initial hopeful thoughts.

Uplifting moments are many, with I’ll Get By epitomising the overall jaunty feeling. The sugary, summery pop of the title track adds another string to this bow, although the 1960s like guitar tones do sound a little too much like the Heartbeat theme tune at times, while the reflective Babybird-esque I’ll Never Forget The Time I Spent With You is another in a similar vein. It does, however, provide an example of room for lyrical growth when Moore rhymes “with you” with, err, “with you”.

Mostly though, the record’s striking appeal comes when Concepcion’s guitaring not so much embellishes a track but takes it to entirely new heights. Closer The Redemption Of Sonic Beauty aims for Queen/Guns N’ Roses grandeur, albeit watered down somewhat, with blinding guitar electrifying alongside a £100 piano’s contribution. But then breakout single The Great Escape and the equally excellent Artificial Screens are true ‘stand up and pay attention’ moments that many bands spend a career looking for: there’s less energy on show on both tracks, but the more focused approach on the former hones in on Concepcion’s impressive skills with great effect, and its conclusion is ridiculously rousing and spine-tingling. Guitaring on the latter then slides away from Marr-like jangle to something more influenced by The Stone Roses’ John Squire, its brilliant solo and an earlier rivetingly rousing bridge helping to create a major highlight.

Single I See Your Ghost shows another side to the band, this time joyfully dabbling in ska, and its accompanying video is worth a watch for the fun the boys are clearly enjoying evoking memories of those classic nutty boy Madness videos from the early 1980s. All the evidence on How Beautiful Life Can Be points to a bunch of lads clearly enjoying themselves, a trait that comes through in the music. After such a sudden rise, hopefully they keep their feet on the ground, and an industry that continually pushes for more from any successful artist can stand off. If they’re given time to take it all in, iron out flaws and enjoy the moment before being squeezed too hard, The Lathums could be in for a hell of a ride.

The Lathums MP3s or CDs

The Lathums on Spotify

More on The Lathums
The Lathums – How Beautiful Life Can Be