The Leisure Society – Alone Aboard The Ark 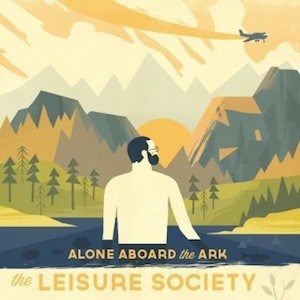 The Leisure Society have some famous fans. Guy Garvey named their Ivor Novello award-winning Last Of The Melting Snow his favourite song of 2008. Ray Davies invited them to record Alone Aboard The Ark, their third album, in his Konk studio in North London. And, perhaps most famously, film director Shane Meadows used to be in a band with Leisure Society leader Nick Hemming, and asked Hemming to score two of his films.

Despite the high profile nature of their support though, The Leisure Society have managed to remain pretty much below the radar. But Alone Aboard The Ark, while remaining unabashedly low-key, seems to embrace a more commercial sound, expanding on their more folky origins to create some gorgeously well-crafted chamber-pop music. There are nods galore to Belle & Sebastian and early Noah And The Whale, but this is the Leisure Society album where Hemming’s vision shines most successfully.

Another Sunday Psalm is an upbeat opener, sunnily strummed guitar and the more wistful, woodwind-enhanced A Softer Voice Takes Louder Hearing both make for an easy introduction to the album. Yet as the album progresses, the arrangements become more lavish and, at times, quite beautiful. The sombre waltz of The Sober Scent Of Paper (inspired by Sylvia Plath’s suicide) is a definite standout, but that’s followed by the gloriously lush All I Have Seen which, with its choir of backing vocals, string section and incongruous guitar solo, really shouldn’t work, but does so beautifully.

Fight For Everyone is Hemming’s stab at synth-pop, layering six different keyboard riffs over each other, and using the Olympics as its lyrical inspiration. In truth, it’s one of the few moments on the album which falls just on the wrong side of twee, but it’s still perfectly listenable. More successful is We Go Together, which utilises jazzy trumpets and barely brushed drums to create a pleasingly bittersweet ballad.

Hemming’s voice brings to mind names like George Harrison, John Darnielle and, at times, Conor O’Brien of Villagers. Yet for once, you never get the impression that The Leisure Society is Hemming’s own personal pet project. The fact that the album was mostly recorded live gives the whole band a chance to shine, with Hemmings’ co-writer Christian Hardy’s keyboards and the flute work of Helen Whitaker sounding particularly effective.

It’s impossible to pin down Alone Aboard The Ark stylistically, bouncing as it does from fuzzy guitar rock on Tearing Down The Arches to the horn-laden feel-good pop of Life Is A Cabriolet. It does mean that some of the poignancy of the band’s earlier work is missing, but it does make for a more consistent album. An album that could just see Hemming and company add some more fans in addition to their celebrity admirers.