The Leisure Society – Into The Murky Water

by Daniel Offen
published: 2 May 2011 in Album Reviews
Tweet 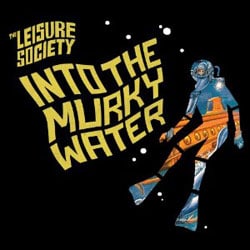 The Leisure Society’s first record The Sleeper was a genuine pleasure, delightfully earnest and tuneful, even if it felt a little unsubstantial in places. Judging from the follow-up, it would appear the The Leisure Society agree. While Into The Murky Water doesn’t really deviate from the melodic folk template they’d already set out, it seems to be written in a key other than constant whimsy.

This is not to say that The Leisure Society have changed completely. Their music still sounds roughly the same. But the band has appeared to grow in confidence, creating an accomplished, rather than simply earnest album. The songs seem bigger, more lushly instrumented. With this increased songwriting ability, the band have lost some of the charm they once had. It no longer seems like a bunch of excited amateurs playing music they love. Into The Murky Water, for better or worse, appears much more professional and polished.

Yet as a result it’s difficult to find any parts where the band have put a foot wrong. The listener is provided with a deluge of competently played folk that keeps on coming. The Sleeper, while occasionally wonderful, wasn’t especially consistent. In The Murky Water doesn’t really falter at any point, and remains continually enjoyable throughout. As such, pinpointing the album’s highlights isn’t easy. There aren’t really any ‘hits’ here; even after repeated listening it’s difficult to pick out and remember key tracks. You Could Keep Me Talking is nice, but it never hits the level of Last Of The Melting Snow or Save It For Someone Who Cares. It’s no worse an album, but it’s not as memorable.

Despite the competence, the lovely melodies and the general cheery outlook, it’s hard to shake the feeling that Into The Murky Water is nothing special. It’s all very pleasant, maybe even a perfect lazy sunny day album. Its melodies and lyrics waft happily by. But its lazy perfection adds up to little more than comfortable music. In their first effort The Leisure Society weren’t exactly pushing the limited boundaries to be pushed in folk music, but it felt like they were trying.

Into The Murky Water allows some of the band’s earnest demeanour to shine through, but ultimately it lacks the spark of its predecessor and it’s difficult to love. They carried themselves through on exuberant charm first time round, but their second release doesn’t continue that journey.